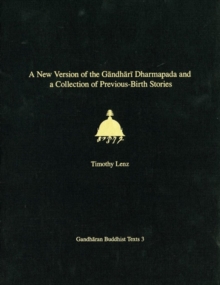 A NEW VERSION OF THE GANDHARI DHARMAPADA AND A COLLECTION OF PREVIOUS-BIRTH STORIES: BRITISH LIBRARY KHAROSTHI FRAGMENTS 16 + 25 (GANDHARAN BUDDHIST TEXTS)

This volume continues the detailed examination of the British Library Kharosthi scrolls--extremely fragile and brittle fragments of manuscript on birch-bark rolls. Although their provenance is uncertain, there are strong indications that they came from Hadda in eastern Afghanistan and were most likely written in the early first century A.D. during the reign of the Saka rulers, making them the oldest known Buddhist manuscripts.

Fragments 16 and 25 are two long, relatively narrow fragments that obviously belong to the same scroll. Two texts were written on the scroll, each by a different scribe. The first text, referred to as the Gandhari London Dharmapada, represents an anthology of verses well known in the Buddhist tradition. The second text is a series of stories concerning previous births of the Buddha and of some of his disciples.