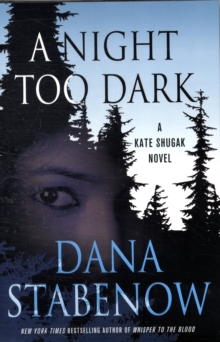 Product Description A Night Too Dark is New York Times bestselling writer Dana Stabenowâ€™s latest, the seventeenth in a series chronicling life, death, love, tragedy, mischief, controversy, nature, and survival in Alaska, Americaâ€™s last real frontier.In Alaska, people disappear every day. In Aleut detective Kate Shugakâ€™s Park, theyâ€™ve been disappearing a lot lately. Hikers head into the wilderness unprepared and get lost. Miners quit without notice at the busy Suulutaq Mine. Suicides leave farewell notes and vanish. Not only are Park rats disappearing at an alarming rate, but so is life in the Park as Kate knows it. Alaska state trooper Jim Chopinâ€™s workload has increased to where he doesnâ€™t make it home three nights out of four, the controversial mine has seduced Johnny and his classmates with summer jobs and divided the Niniltna Native Associationâ€”the aunties are to a woman selling outâ€”and a hostile environmental activist organization has embraced the Suulutaq Mine as their reason for being. Itâ€™s almost a relief when Kate finds a body. This she can handle.Until the identity of the body vanishes, too.In this latest Kate Shugak novel, the smart, sexy PI, her wolf/husky hybrid Mutt, and Chopper Jim are only just beginning to realize the fallout from the discovery of the worldâ€™s second-largest gold mine in their backyard. â€œMine change everything,â€ Auntie Vi said in Whisper to the Blood (the previous book in the series and the first to hit the New York Times bestseller list).And itâ€™s only just beginning. From Publishers Weekly Bestseller Stabenow deftly explores the environmental and economic impact of gold mining in her sizzling 17th novel to feature Alaska PI Kate Shugak (after 2009's Whisper to the Blood). Global Harvest Resources is intent on opening the Suulutaq Mine, where substantial deposits of gold, copper, and molybdenum have been found on state leases in the middle of the Iqaluk Wildlife Refuge, 50 miles from Niniltna. When Kate, chair of the board of directors of the Niniltna Native Association, and state trooper Jim Chopin find bear-eaten human remains near the truck of Global Harvest roustabout Dewayne A. Gammons, they assume the remains are Gammons's. After all, there was a suicide note in Gammons's truck. Weeks later, a wounded and nearly catatonic Gammons emerges from the woods near Kate's homestead. More puzzlesâ€”and murderâ€”follow. An uneasy resolution to the crimes suggests further drama ahead for Kate and her fellow Park rats. Author tour. (Feb.) Copyright Â© Reed Business Information, a division of Reed Elsevier Inc. All rights reserved. From Booklist This long-running series, which began in 1992 with the Edgar Awardâ€“winning A Cold Day for Murder, shows small signs of weariness in the eighteenth installment. The story begins with a man going missing and, later, his body being found. Then, later still, the dead man turns up alive, leading Kate Shugak and Alaskan state trooper Jim Chopin to wonder: Just who did that body belong to, anyway? While the characters are as engaging as always, and Stabenowâ€™s writing just as sprightly, the book feels a bit lethargic. There are large chunks where nothing much happensâ€”for example, the body isnâ€™t discovered until nearly a third of the way through the book, and itâ€™s a good while before the â€œmissingâ€ man turns up alive. A leisurely pace is one thing, but some readers might find that this one meanders a little too much. On the other hand, fans of Murder, She Wroteâ€“style mysteries (lengthy introductions of character and plot setup, relatively speedy resolution) will have no problems, and longtime fans will be pleased to spend more time with the always appealing Shugak. --David Pitt Review Praise for Whisper to the Bloodâ€œGrade: A. Some of the greatest mystery writers enrich us with their wonderful sense of place. Stabenow is one of them: Alaskaâ€™s answer to Tony Hillerman, she brings us the sights and sounds that few visitors will ever know. . . . If you have