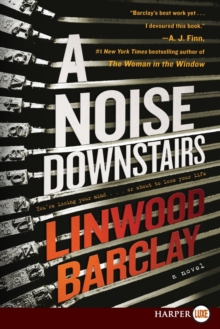 A NOISE DOWNSTAIRS: A NOVEL

Product Description The New York Times bestselling author of No Time for Goodbye returns with a haunting psychological thriller that blends the twists and turns of Gillian Flynn with the driving suspense of Harlan Coben, in which a man is troubled by odd sounds for which there is no rational explanation. College professor Paul Davis is a normal guy with a normal life. Until, driving along a deserted road late one night, he surprises a murderer disposing of a couple of bodies. Thatâ€™s when Paulâ€™s "normal" existence is turned upside down. After nearly losing his own life in that encounter, he finds himself battling PTSD, depression, and severe problems at work. His wife, Charlotte, desperate to cheer him up, brings home a vintage typewriterâ€”complete with ink ribbons and heavy round keysâ€”to encourage him to get started on that novel heâ€™s always intended to write. However, the typewriter itself is a problem. Paul swears itâ€™s possessed and types by itself at night. But only Paul can hear the noise coming from downstairs; Charlotte doesnâ€™t hear a thing. And she worries heâ€™s going off the rails. Paul believes the typewriter is somehow connected to the murderer he discovered nearly a year ago. The killer had made his victims type apologies to him before ending their lives. Has another sick twist of fate entwined his life with the killerâ€”could this be the same machine?Â Increasingly tormented but determined to discover the truth and confront his nightmare, Paul begins investigating the deaths himself. But that may not be the best thing to do. Maybe Paul should just take the typewriter back to where his wife found it. Maybe he should stop asking questions and simply walk away while he can. . . . Review â€œLinwood Barclayâ€™s novels â€“ as intelligent as Michael Connellyâ€™s, as compelling as Harlan Cobenâ€™s â€“ never fail to astonish. A Noise Downstairs, his best work yet, is a cobra of a story: smooth, slippery, unnerving . . . and likely to strike when you least expect it. I devoured this book.â€ (A. J. Finn, #1Â  New York TimesÂ bestselling author of The Woman inÂ the WindowÂ ) â€œVintage Barclay â€“ A Noise Downstairs is an utterly compelling read with a twist you wonâ€™t see coming. I loved it!â€ (Shari Lapena, New York Times bestselling author of A Stranger in the House and The Couple Next Door) â€œ[Barclay] does a masterful job of layering on the mysteries until weâ€™re almost frantically turning the pages, impatient to find out what the hell is going on. A beautifully executed thriller.â€ ( Booklist (starred review)) â€œPrepare to be blindsided by an ending you didnâ€™t see coming. Barclayâ€™s nerve-wracking tale will have readers scared to close their eyes at night.â€ ( Library Journal) â€œA terrific edge-of-your-seat Hitchcockian psychological thriller that lives up to all the hype.â€ ( New York Journal of Books) â€œArtfully crafted.â€ ( New York Times Book Review) â€œBarclay is a master of manipulation. . . . Predictable becomes unpredictable in this compelling book that echoes the best of Harlan Coben.â€ (Associated Press) â€œ[A] fast-paced psychological thriller . . . Barclay carefully conceals hidden motives and secret lives until the startling conclusion. Harlan Coben fans will find much to like.â€ ( Publishers Weekly) â€œCreepy and compelling. . . . Barclay expertly weaves together the various plot strands to reach a wholly unexpected conclusion.â€ (The Guardian) â€œ[A] twisty psychological tale . . . a satisfying and clever novel. The large cast and the storyâ€™s many moving parts perfectly set the reader up for the final climactic twist.â€ (Mystery Scene) From the Back Cover College professor Paul Davis is a normal guy with a normal life. But that normal existence is turned upside down late one evening when he catches a colleague trying to dispose of two dead bodies. After nearly losing his own life that night, Paul is battling PTSD, depression, and severe problems at work and home. To cheer him up, his wife Charlotte gives him a surprise present, a vinta