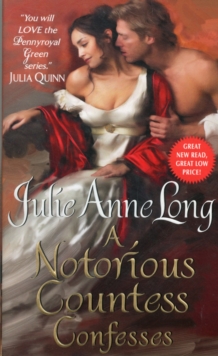 Product Description Voted Best Overall Romance of 2012 by readers at All About Romance. (And Adam Sylvaine was voted the best overall hero). "Julie Anne Long reinvents the historical romance for modern readers, delivering intense, passionate characters and high adventure. Her writing glows." --Amanda Quick "You will LOVE the Pennyroyal Green series." --Julia Quinn A notorious lady learns just how wicked a good man can be in the latest installment of RITA Award nominee Julie Anne Long's emotionally charged Pennyroyal Green series. A Notorious Countess Confesses is absolutely unputdownable historical romance for fans of Karen Hawkins and Sabrina Jeffries; another gem in the bestselling series set in Regency England and centered on a long-standing feud between members of two wealthy Sussex families, the Eversea and Redmond clans. The breathtaking romantic adventures of a former courtesan-turned-noblewoman, A Notorious Countess Confesses stokes the Pennyroyal fires hotter than ever before, providing readers with all the passion, scandal, and true love they could possibly hope for. From the Back Cover She rose to spectacular heights . . . From Covent Garden to courtesan to countess, beautiful, fearless, shamelessly ambitious Evie Duggan has riveted London in every role she plays. But the ton never could forgive her scandalousâ€”if shockingly shortâ€”marriage, and when her star plummets amid gleefully vicious gossip, the countess escapes to the only legacy left to her: a manor house in Pennyroyal Green. He never expected to fall so hard . . . He has the face of a fallen angel and a smolder the devil would envy, but Vicar Adam Sylvaine walks a precarious line: resisting temptation . . . and the wild Eversea blood in his veins. Adam's strength is tested when scandal, aka the countess, moves to Sussex. But when a woman who fiercely guards her heart and a man entrusted with the souls of an entire town surrender to a forbidden desire, will the sweetest sin lead them to heaven . . . or make outcasts of them forever? About the Author USA Today bestselling author and RitaÂ® Award winner Julie Anne Longâ€™s books have been translated into eighteen languages, nominated for numerous awards, and have appeared on dozens of â€œBest ofâ€ lists. NPR named her Pennyroyal Green series as one of the Top 100 romance series of all time. She currently lives in Northern California.