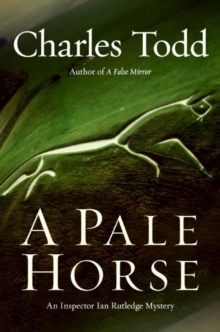 Product Description In the ruins of Yorkshire's Fountains Abbey lies the body of a man wrapped in a cloak, the face covered by a gas mask. Next to him is a book on alchemy, which belongs to the schoolmaster, a conscientious objector in the Great War. Who is this man, and is the investigation into his death being manipulated by a thirst for revenge? Meanwhile, the British War Office is searching for a missing man of their own, someone whose war work was so secret that even Rutledge isn't told his real name or what he did. The search takes Rutledge to Berkshire, where cottages once built to house lepers stand in the shadow of a great white horse cut into the chalk hillside. The current inhabitants of the cottages are outcasts, too, hiding from their own pasts. Who among them is telling the truth about their neighbors and who is twisting it? Here is a puzzle requiring all of Rutledge's daring and skill, for there are layers of lies and deception, while a ruthless killer is determined to hold on to freedom at any cost. And the pale horse looming overhead serves as a reminder that death is never finished with anyone, least of all the men who fought in the trenches of France. From Publishers Weekly Starred Review. The exemplary 10th Inspector Ian Rutledge historical whodunit (after A False Mirror) offers tight plotting and rich characterization amid understated but convincing evocations of postâ€“WWI England. Haunted by memories of battle, unable to find a safe haven after his discharge from a psychiatric hospital and the abrupt departure of his fiancÃ©e, shell-shocked veteran Rutledge has returned to his prewar life as a Scotland Yard inspector. This time out, the War Office wants him to locate a mysterious person of interest, connected with (and perhaps the same as) an unidentified corpse found at a Yorkshire abbey. Rutledge toils diligently to uncover personal secrets and shames that may have motivated someone to kill, and their connection to a long-ago romance between the suspected killer's wife and the local inspector investigating the case. The mother and son writing as Charles Todd show no evidence of running out of ideas for murder mysteries that illuminate new aspects of their compelling protagonist and the horrors of the Great War. (Dec.) Copyright Â© Reed Business Information, a division of Reed Elsevier Inc. All rights reserved. About the Author Charles Todd is theÂ New York TimesÂ bestselling author of the Inspector Ian Rutledge mysteries, the Bess Crawford mysteries, and two stand-alone novels. A mother-and-son writing team, they live on the East Coast.