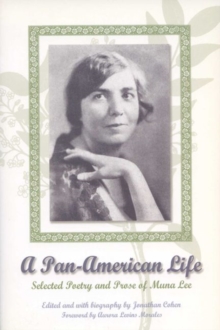 A PAN-AMERICAN LIFE: SELECTED POETRY AND PROSE OF MUNA LEE (THE AMERICAS)

Product Description The extraordinary Muna Lee was a brilliant writer, lyric poet, translator, diplomat, feminist and rights activist, and, above all, a Pan-Americanist. During the twentieth century, she helped shape the literary and social landscapes of the Americas. This is the first biography of her remarkable life and a collection of her diverse writings, whichÂ  embody her vision of Pan America, an old concept that remains new and meaningful today. Review "A poet who is also a sound scholar, a mistress of tongues, and a profound believer in a cause, is a rare and wonderful thing. Muna Lee is all four."â€”Archibald MacLeish, in The American Story "Jonathan Cohen has given us the exquisite gift of recognition: the life of Muna Leeâ€”a poet, essayist, human rights activist, and indeed a visionary and fervent Pan-Americanist. Through Cohen's insightful and original biography, readers will get to know, as well as love, the spirit of Muna Lee, one of the most extraordinary and creative figures of the twentieth century, a builder of bridges and hopes. Cohen's work will not allow us to forget her. More so, it rescues her from the invisibility of her work and life. A magnificent tribute to a magnificent woman."â€”Marjorie Agosin, author of A Map of Hope: Women's Writing on Human Rights "Jonathan Cohenâ€™s edition of Muna Leeâ€™s work and the accompanying biographical essay function . . . as a combined project of historical recovery . . . . It reclaims Leeâ€™s place among American poets and establishes the importance of her work as a pan- Americanist whose entry into Puerto Rican society opened a path to a life-long concern with establishing closer cultural links between North and South America. . . . This collection, by gathering a significant selection of her work, helps us begin to appreciate an important figure in pan-American literature."â€”Lizabeth Paravisini-Gebert, Review: Literature and Arts of the Americas "Jonathan Cohen's informative ibiography is an extensive survey of Muna Lee's life, her development as a poet, and as a feminist."â€”Jean Franco, Professor Emeritus of Comparative Literature, Columbia University About the Author Â Â Â Â Muna Lee (1895â€“1965) was a celebrated lyric poet, translator and advocate of Latin American literature, feminist, and scholar. She was the first wife of Luis MuÃ±oz MarÃ­n, who became Puerto Ricoâ€™s first elected governor. She was appointed to a state department post by Franklin Delano Roosevelt and served as an inter-American cultural specialist from 1941 until her retirement in 1965.Â Â Â Â Jonathan Cohen, author of prize-winning translations of Latin American poetry, is a pioneering scholar in the field of inter-American literature, for which he has received prestigious national research awards. He is writer/editor of the surgery department at Stony Brook University, and also a member of the affiliated faculty of the Latin American and Caribbean Studies program there.