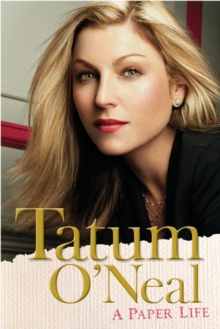 Product Description Filled with stunning revelations, here is the sensational memoir of one of Hollywoodâ€™s most talented and troubled stars?an inspirational true tale of survival and triumph against all odds Though she has shunned the media spotlight, Academy Award-winning actress Tatum Oâ€™Neal at last goes on the record to tell her story-a tale of personal turmoil and ultimate triumph that is part Hollywood tell-all, part Greek tragedy, and part Shakespearean drama. In her trademark no-holds-barred style, she names names as she chronicles the ups and downs of being Hollywood royalty, including â€¢ her nearly fatal addiction to drugs â€¢ her destructive relationships with mother, the late actress Joanna Moore; her famously overbearing and flamboyant father, Ryan Oâ€™Neal and his former longtime live-in love, Farrah Fawcett; and her wildly explosive ex-husband, international tennis pro John McEnroe â€¢ her early years-a time of tubulence, loneliness, and abuse-as a virtual orphan forced to raise herself and her â€œIrish twin,â€ younger brother, Griffin â€¢ her explosive, untold stories of the top figures in pop culture and sports Ultimately, we see the emergence of an extremely gifted, spirited, and intelligent woman?the ultimate survivor who is a role model to all women. From Publishers Weekly At age 10, O'Neal became the youngest Oscar winner in history for her performance in Paper Moon. In this honest, disturbing memoir, O'Neal, now 41, reveals the behind-the-scenes story of her lonely, chaotic lifeâ€”one dominated by struggles with drugs and damaging relationships. O'Neal portrays her divorced parents (actors Joanna Moore and Ryan O'Neal) as neglectful and abusive, with drug problems of their own. Though O'Neal appeared in such kid-fodder movies as The Bad News Bears and Little Darlings, she says that during the '70s and early '80s she battled depression and attempted suicide. "I found that coke made me feel so much better," she recounts in the straightforward though unoriginal language that characterizes the narrative. Much of the book's second half covers her fraught marriage to volatile tennis champ John McEnroe; these passages alternate between recollections of the pleasure of being in love and having children and the pain of living with McEnroe, whom she depicts as controlling and demeaning. Ten years and three children later, O'Neal and McEnroe divorced. She resumed using drugs, fought child custody battles and watched her mother die of cancer. Although O'Neal speeds through the details, she addresses her addictions: "I wanted to take my own life but... instead... I started doing drugs 24/7. I couldn't stop." She also zips through her recovery, abruptly claiming "rebirth" in the final chapter. Writing this memoir seems to have been cathartic for O'Neal. Perhaps reading it will provide inspiration to other abuse victims and addicts. Copyright Â© Reed Business Information, a division of Reed Elsevier Inc. All rights reserved. Review â€œA Paper Life, her slash-and-burn family album aboutâ€¦oh, go read it. You know you want to.â€ (Janet Maslin, New York Times) â€œI know memoirs are always described as â€˜explosive,â€™ but this one really is.â€ (Liz Smith) â€œIn her red-hot tome, Oâ€™Neal dishes on the...Hollywood of the 1970s - in all its raunchiness.â€ (Daily News) â€œIf an Academy Award were handed out for the most scorching family drama, it could certainly go to Tatum Oâ€™Neal...â€ ( USA Today) â€œIn her bombshell autobiography...Tatum Oâ€™Neal...names names...while telling, for the first time, an eye-popping story...â€ ( People) â€œForget â€˜Mommie Dearest;â€™...it looks as if Tatum Oâ€™Nealâ€™s A PAPER LIFE...might be the new classic. ( Philadelphia Inquirer) â€œIn this honest, disturbing memoir, Oâ€™Neal...reveals the behind-the-scenes story of her lonely, chaotic life... ( Publishers Weekly) From the Back Cover At age ten, Tatum O'Neal became the youngest Oscar winner in history for her performance in the film classic Paper Moon. She was hail