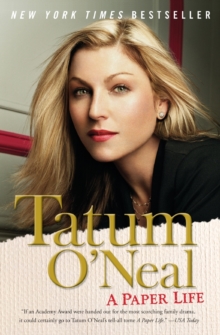 Product Description Filled with stunning revelations, here is the sensational memoir of one of Hollywoodâ€™s most talented and troubled stars?an inspirational true tale of survival and triumph against all odds Though she has shunned the media spotlight, Academy Award-winning actress Tatum Oâ€™Neal at last goes on the record to tell her story-a tale of personal turmoil and ultimate triumph that is part Hollywood tell-all, part Greek tragedy, and part Shakespearean drama. In her trademark no-holds-barred style, she names names as she chronicles the ups and downs of being Hollywood royalty, including â€¢ her nearly fatal addiction to drugs â€¢ her destructive relationships with mother, the late actress Joanna Moore; her famously overbearing and flamboyant father, Ryan Oâ€™Neal and his former longtime live-in love, Farrah Fawcett; and her wildly explosive ex-husband, international tennis pro John McEnroe â€¢ her early years-a time of tubulence, loneliness, and abuse-as a virtual orphan forced to raise herself and her â€œIrish twin,â€ younger brother, Griffin â€¢ her explosive, untold stories of the top figures in pop culture and sports Ultimately, we see the emergence of an extremely gifted, spirited, and intelligent woman?the ultimate survivor who is a role model to all women. Review â€œA Paper Life, her slash-and-burn family album aboutâ€¦oh, go read it. You know you want to.â€ (Janet Maslin, New York Times) â€œI know memoirs are always described as â€˜explosive,â€™ but this one really is.â€ (Liz Smith) â€œIn her red-hot tome, Oâ€™Neal dishes on the...Hollywood of the 1970s - in all its raunchiness.â€ (Daily News) â€œIf an Academy Award were handed out for the most scorching family drama, it could certainly go to Tatum Oâ€™Neal...â€ ( USA Today) â€œIn her bombshell autobiography...Tatum Oâ€™Neal...names names...while telling, for the first time, an eye-popping story...â€ ( People) â€œForget â€˜Mommie Dearest;â€™...it looks as if Tatum Oâ€™Nealâ€™s A PAPER LIFE...might be the new classic. ( Philadelphia Inquirer) â€œIn this honest, disturbing memoir, Oâ€™Neal...reveals the behind-the-scenes story of her lonely, chaotic life... ( Publishers Weekly) From the Back Cover A real Hollywood-style tell-all, this is the extremely candid and highly explosive autobiography of one of the movie industry's most talented and troubled young stars. At age ten, Tatum O'Neal became the youngest Oscar winner in history for her performance in the film classic Paper Moon. As the sidekick to her father, the flamboyant star and man-about-town Ryan O'Neal, she became a fixture at the most glamorous Hollywood parties and counted celebrities ranging from Cher to Stanley Kubrick among her childhood friends. Yet behind the glittering faÃ§ade of Tatum's life lay heartbreak: abandonment, abuse, neglect, and drug addiction. She reveals the most intimate secrets of her dysfunctional relationships with her father, Ryan O'Neal, and stepmother, Farrah Fawcett, as well as her alcoholic mother, Joanna Moore, and ex-husband, tennis pro John McEnroe. After the collapse of her marriage and with no real family to turn to, Tatum succumbed to the demons of her past that would nearly kill her. Now she has emerged clean and sober, rediscovering herself as an actress, mother, and wonderfully vibrant woman in what she considers the prime of her life. About the Author The youngest actress ever to win an Academy AwardÂ®, Tatum O'Neal has been a public figure for the last three decades. An actress, author, and the mother of three children, she makes her home in Los Angeles, California.