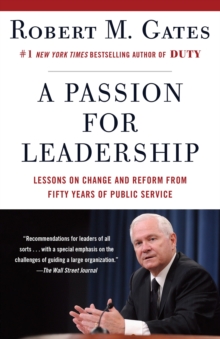 A PASSION FOR LEADERSHIP: LESSONS ON CHANGE AND REFORM FROM FIFTY YEARS OF PUBLIC SERVICE

Product Description Having led change successfully at three sprawling, monumental organizationsâ€”the CIA, Texas A&M University, and the Department of Defenseâ€”Robert M. Gates offers the ultimate insider's look at how leaders can transform large organizations and companies. For many Americans, bureaucracy and corporate structure are code words for inertia. Gates knows that it doesn't have to be that way. With stunning clarity, he shares how simple plans, faithfully executed, can cut through the mire of bureaucracy to reform organizational culture. And he shows that great leaders listen and respond to their teams and embrace the power of compromise. Using the full weight of his wisdom, candor, and devotion to duty, he empowers leaders at any level to effectively implement his leadership strategies. Review Selection, Huffington Post 5 Political Books for Insight This Election Season (2016) Selection, Publishers Weekly Business & Economics Top 10 for Fall 2015 "Full of strong advice for good leadership. . . . Provides interesting insight into Gates's understanding of the impressive leadership positions he has held." â€” The Huffington Post"A guide to leading large institutions through reform and change. . . . [Gates] brings [his suggestions] to life through stories of his own powerful and critical leadership roles." â€” The Washington Post,Â Nine Leadership Books to Watch for in 2016 "The book [politicians] should all admit to readingâ€”and actually read... Refreshingly nonideological... Mr. Gates preaches the value of civility, internal transparency, and work-life balance." â€” The Wall Street Journal About the Author ROBERT M. GATESÂ served as secretary of defense under both President George W. Bush and President Barack Obama. He was also an officer in the United States Air Force and worked for the CIA before being appointed director of the agency. He served eight presidents of both political parties and was a member of the National Security Council staff in four administrations.Â He was president of Texas A&M University from 2002 to 2006, is currently chancellor of the College of William & Mary, was named president of the Boy Scouts of America in 2013, and has served on several corporate boards of directors. Excerpt. Â© Reprinted by permission. All rights reserved. 1 Why Bureaucracies So Often Fail Us Everybody hates bureaucracies, even those who work in them. Yet in twenty-first-century America, apart from a handful of hermits and survivalists living off the grid, dealing with impenÂ­etrable, impersonal, infinitely complex, obdurate, arrogant, and often stupefyingly incompetent bureaucracies is an everyday travail for everyone. Think about it: Social Security. Medicare. Local, state, and federal taxing agencies. Getting a driverâ€™s license. Obtaining documents for business, remodeling your house, or getting a building permit. Any federal department or agency. Dealing with the phone company, your credit card issuer, a credit bureau, a billing error by a big chain store. Navigating airport security, health-care insurance, university and public school administrations. Â  Hardly a day passes in the life of any American without his or her having to confront one or another bureaucracy, standing in line, dialing a telephone number, only to enter an automated labyÂ­rinth seemingly devoid of humans and humanity, being placed on indefinite hold, trying to access a bad government or business Web site, or being shuffled from one office to the next to find that one person, the anomaly, who can fix a problem. Encounters with a bureaucracy almost always have stress and frustration as by-products. And finding someone in a bureaucracy who is pleasÂ­ant and can solve oneâ€™s problem quickly is so unusual as to be very nearly a life-altering experience. President Lyndon Johnson once said, â€œIf the first person who answers the phone cannot answer your question, it is a bureaucracy.â€ Donâ€™t we all know it. Â  Despite political paralysis in Washing