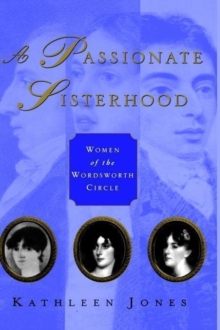 A PASSIONATE SISTERHOOD: WOMEN OF THE WORDSWORTH CIRCLE

The complicated tangle of their relations reads like something out of a fat English novel. At the close of the 18th century, the Fricker sisters wed three close friends, two of whom would indelibly shape Romantic literature. Sexy, impulsive Sarah found her match in Samuel Taylor Coleridge; Mary, the intellectual one, married Robert Lovell, who left her a widow at 25; and self-effacing Edith, given to depression, won Robert Southey despite his family's disapproval. Coleridge later fell in love with Sara Hutchinson, younger sibling of his pal William Wordsworth's wife, Mary, and childhood friend of William's beloved sister, Dorothy. For many years, most of them lived in England's Lake District, which the Romantic poets made famous while they squabbled among themselves. Even as relationships among the older generation deteriorated, Dora Wordsworth, Edith May Southey, and Sara Coleridge formed a close bond that maintained their parents' connections. Kathleen Jones's engaging, accessible prose keeps the narrative moving at a brisk clip, untangling the Wordsworth circle's often snarled interactions with impressive clarity. Drawing on extensive correspondence that pithily reveals the forceful personalities involved, she paints a colorful group portrait highlighting the women's often overlooked role in forging the personal and intellectual ties that sustained an influential English cultural movement. --Wendy Smith