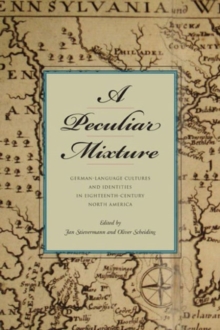 Product Description Through innovative interdisciplinary methodologies and fresh avenues of inquiry, the nine essays collected in A Peculiar Mixture endeavor to transform how we understand the bewildering multiplicity and complexity that characterized the experience of German-speaking people in the middle colonies. They explore how the various cultural expressions of German speakers helped them bridge regional, religious, and denominational divides and eventually find a way to partake in Americaâ€™s emerging national identity. Instead of thinking about early American culture and literature as evolving continuously as a singular entity, the contributions to this volume conceive of it as an ever-shifting and tangled â€œweb of contact zones.â€ They present a society with a plurality of different native and colonial cultures interacting not only with one another but also with cultures and traditions from outside the colonies, in a â€œpeculiar mixtureâ€ of Old World practices and New World influences. Aside from the editors, the contributors are Rosalind J. Beiler, Patrick M. Erben, Cynthia G. Falk, Marie Basile McDaniel, Philip Otterness, Liam Riordan, Matthias SchÃ¶nhofer, and Marianne S. Wokeck. Review â€œThe essays in this book make a strong case for understanding the immigrant experiences of the Germans who came to America in the eighteenth century through the lens of cultural history, abetted by material culture, the history of the book, and close literary analysis. This is a deeply informative book and one that deserves broad attention.â€ â€”David D. Hall, Harvard Divinity Schoolâ€œThis is an excellent collection of recent scholarship on the changing and diverse nature of German-speaking people and their culture in eighteenth-century America. In recent years, as the result of scholars using transatlantic perspectives and conceptualizations, Germans have become the most thoroughly researched immigrant ethnic group of the period, and this volume demonstrates why. Following a lucid introduction by Jan Stievermann, the book includes essays by a mixture of young and established scholars who elaborate on the work of the past twenty years and employ new interdisciplinary perspectives to deepen our understanding of early America.â€ â€”Aaron Fogleman, Northern Illinois Universityâ€œWhat did it mean to be â€˜Germanâ€™ in eighteenth-century British North America? The insightful essays in A Peculiar Mixture take up that questionâ€”and complicate itâ€”in fresh ways by exploring shifting experiences of ethnicity, culture, and identity. Notable is the interdisciplinary combination of material culture, literature, and new manuscript sources that animate these studies. A remarkable and creative collection.â€ â€”Steven M. Nolt, Goshen Collegeâ€œThese essays break new ground. In important respects this collection will further the work of bringing German American studies more fully into the mainstream of the study of early America.â€ â€”Ned Landsman, SUNY at Stony Brookâ€œThe range of topics and of methodologies in this collection is impressive. The essays chart a roadmap of what should and must be done in order to fully appreciate the position, role, and culture of Germans in North America. For German and American scholars, the volume represents at the same time a huge challenge to squarely accept America's multiethnic society as a linguistically demanding as well as neglected research field. Reading these fine contributions should stimulate scholars to engage more energetically with a multiethnic Atlantic history.â€ â€”Hermann Wellenreuther, Georg-August-Universityâ€œA Peculiar Mixture is a fine collection; scholarly stand-alone chapters are even better as part of a whole. This is an essential collection for all scholars of early America and Atlantic history.â€ â€”William Oâ€™Reilly, Journal of American Historyâ€œThe collection of essays in A Peculiar Mixture serves the scholarly community in at least two ways. For those actively engaged in studies of ethnicity, migration, and cultural histor