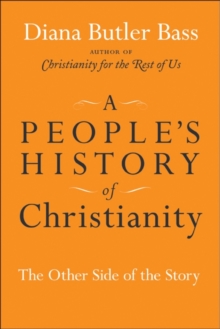 A PEOPLE'S HISTORY OF CHRISTIANITY: THE OTHER SIDE OF THE STORY

Product Description â€œIt would be difficult to imagine anyone reading this book without finding some new insight or inspiration, some new and unexpected testimony to the astonishing breadth of Christianity through the centuries.â€ â€” Philip Jenkins, author of The Lost History of Christianity â€œInteresting, insightful, illuminating, and remarkably relevant.â€ â€” Marcus Borg, author of The Heart of Christianity In the tradition of Howard Zinn comes a new history of Christianity that reveals its bottom-up movements over the past 2,000 years, which preserved Jesusâ€™s original message of social justice, and how this history is impacting the church today. From Publishers Weekly In this panoramic view of two millennia of Christian history, Butler Bass ( Christianity for the Rest of Us) attempts to give contemporary progressive (the author prefers the term "generative") Christians a sense of their family history, refracted through little known as well as famous men and women whose work within and outside the institutional church fueled sometimes "alternative" practices as they tried to follow Jesus the Prophet. "Without a sense of history, progressive Christianity remains unmoored," argues Butler Bass, a former columnist for the New York Times syndicate. Organized chronologically, each section of the book includes a chapter on religious observance and one on social justice, illuminating the author's conviction that authentic Christianity can be discovered in the practice of loving God and neighbor. Laced with stories from the author's own life and with contemporary examples of "generative Christianity," Butler Bass's version of Christian history includes familiar figures like the fourth-century church father Gregory of Nyssa and lesser-known individuals like the 19th century American abolitionist Maria Stewart. Is this truly "the other side of the story," as the subtitle proclaims? It's definitely a start. (Mar.) Copyright Â© Reed Business Information, a division of Reed Elsevier Inc. All rights reserved. From Booklist Bass borrows Howard Zinnâ€™s perennial concept of history from the perspective of ordinary people to tell the story of Christianity by focusing not on institutions but on tales told down through the ages by the constituents of what she calls â€œgenerative Christianity,â€ who sought to live the Christian life by doing right in the eyes of God, as well as on those who rebelled against the church when they felt it necessary; that is, when the church became too rich or too comfortable with the wielding of power. Still, besides ordinary folks, she includes well-known authors, pastors, and theologians (e.g., Origen, John Calvin, Henri Nouwen). Itâ€™s a messy story, incorporating plenty of personal anecdotes en route from the early Christians (100â€“500) through medieval (500â€“1450) and Reformation (1450â€“1650) Christianity to modern (1650â€“1950) and contemporary Christianity (1945â€“the present). Clearly, Bass intends this to be the alternative history of a complicated topic and an important contribution to the historiography of Christianity. --June Sawyers Review â€œIt would be difficult to imagine anyone reading thi book without finding some new insight or inspiration, some new and unexpected testimony to the astonishing breadth of Christianity through the centuries.â€ (Philip Jenkins, author of The Lost History of Christianity) â€œ...immediately accessible, helped along by frequent and shrewd linkages to contemporary counterpoints. This presentation includes lots of folk along the way who never made the â€˜power lists.â€™ Readers will resonate with this inclusiveness and be grateful to Bass for making them fellow travelers in the on-going story.â€ (Walter Brueggemann, Columbia Theological Seminary) â€œCharmingly written and refreshing to read, yet rich in details and thorough in its mapping of the major themes and events that have shaped the evolution of the Western Church, A Peopleâ€™s History is our story re-told with both clear-eyed affe