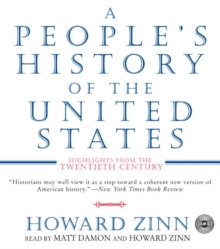 A PEOPLE'S HISTORY OF THE UNITED STATES CD

Product Description â€œItâ€™s a wonderful, splendid bookâ€”a book that should be read by every American, student or otherwise, who wants to understand his country, its true history, and its hope for the future.â€ â€”Howard Fast, author of Spartacus and The Immigrants â€œ[It] should be required reading.â€ â€”Eric Foner, New York Times Book Review Library Journal calls Howard Zinnâ€™s iconic A People's History of the United States â€œa brilliant and moving history of the American people from the point of view of thoseâ€¦whose plight has been largely omitted from most histories.â€ Packed with vivid details and telling quotations, Zinnâ€™s award-winning classic continues to revolutionize the way American history is taught and remembered. Frequent appearances in popular media such as The Sopranos, The Simpsons, Good Will Hunting, and the History Channel documentary The People Speak testify to Zinnâ€™s ability to bridge the generation gap with enduring insights into the birth, development, and destiny of the nation. From the Back Cover Known for its lively, clear prose as well as its scholarly research, A Peopleâ€™s History isthe only volume to tell Americaâ€™s story from the point of view ofâ€”and in the wordsofâ€”Americaâ€™s women, African-Americans, Native Americans, working poor, andimmigrant laborers. Here we learn that many of our countryâ€™s greatest battlesâ€”childlaborlaws, womenâ€™s rights, racial equalityâ€”were carried out at the grass roots level,against bloody resistance. Revised and updated with new chapters on Clintonâ€™s presidency, the 2000 Election,and the â€œWar on Terrorism,â€ A Peopleâ€™s History of the United States featuresinsightful analysis of the most important events in our history. About the Author Howard Zinn (1922â€“2010) was a historian, playwright, and social activist. In addition to A Peopleâ€™s History of the United States, which has sold more than two million copies, he is the author ofÂ numerous books including The People Speak, Passionate Declarations, andÂ the autobiography, You Canâ€™t Be Neutral on a Moving Train. About the Reader: Matt Damon Matt Damon's film career has including starring roles in Good Will Hunting (which he co-wrote), The Rainmaker, Saving Private Ryan, The Talented Mr. Ripley, and the upcoming All the Pretty Horses.Â  He is currently producing the TV mini-series on A People's History of the United States.