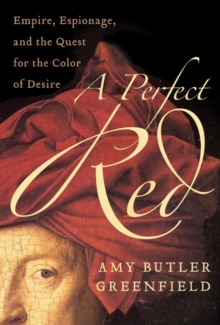 A PERFECT RED: EMPIRE, ESPIONAGE, AND THE QUEST FOR THE COLOR OF DESIRE

Product Description A Perfect Red recounts the colorful history of cochineal, a legendary red dye that was once one of the world's most precious commodities. Treasured by the ancient Mexicans, cochineal was sold in the great Aztec marketplaces, where it attracted the attention of the Spanish conquistadors in 1519. Shipped to Europe, the dye created a sensation, producing the brightest, strongest red the world had ever seen. Soon Spain's cochineal monopoly was worth a fortune. Desperate to find their own sources of the elusive dye, the English, French, Dutch, and other Europeans tried to crack the enigma of cochineal. Did it come from a worm, a berry, a seed? Could it be stolen from Mexico and transplanted to their own colonies? Pirates, explorers, alchemists, scientists, and spies -- all joined the chase for cochineal, a chase that lasted more than three centuries. A Perfect Red tells their stories -- true-life tales of mystery, empire, and adventure, in pursuit of the most desirable color on earth. From Publishers Weekly "Elusive, expensive and invested with powerful symbolism, red cloth became the prize possession of the wealthy and well-born," Greenfield writes in her intricate, fully researched and stylishly written history of Europe's centuries-long clamor for cochineal, a dye capable of producing the "brightest, strongest red the Old World had ever seen." Discovered by Spanish conquistadors in Mexico in 1519, cochineal became one of Spain's top colonial commodities. Striving to maintain a trade monopoly, Spain fiercely guarded the secrets of cochineal cultivation in Mexico and only after centuries of speculation (was the red powder derived from plant or animal?) did 18th-century microscopes bring the mystery to light. Greenfield recounts the wild, clandestine attempts by adventurer naturalists to cultivate both the cochineal insect and its host plant, nopal, beyond their native Mexico, acts of folly driven by the desire for scientific fame and commercial profit. Greenfield's narrative culminates in the 19th-century discovery of synthetic dyes that, for a period, eclipsed cochineal. However, as she explains, owing to its safety, cochineal is back to stay as a cosmetics and food dye. Greenfield's absorbing account encompasses the history of European dyers' guilds, the use of pigments by artists such as Rembrandt and Turner, and the changing associations of the color red, from the luxurious robes of kings and cardinals to its latter-day incarnation as the garb of the "scarlet woman." 8 pages of color illus. not seen by PW. Agent, Tina Bennett. (May 2) Copyright Â© Reed Business Information, a division of Reed Elsevier Inc. All rights reserved. From Booklist Pirates! Kings! Beautiful ladies! Daring spies! Elements essential for a page-turning action/adventure thriller, yes, but who would think they'd turn up in a scholarly examination of a little-known substance called cochineal? It is responsible for producing that elusive shade of red deemed vital for dyeing royalty's robes, and the quest for this coveted resource involved some of history's most infamous episodes and ignoble scoundrels. Native to Mexico, the scale insect cochineal was first harvested as a dyestuff by the ancient Aztecs, and once its properties were discovered by European conquistadors, it became the quarry in an international race to obtain a monopoly on its production. As first Spain, and then England, France, and Holland entered the race to procure this precious commodity, nothing less than the way in which the New World was conquered and the Old World prospered was at stake. The granddaughter and great-granddaughter of dyers, Greenfield combines the investigative prowess of a detective with the intellectual reasoning of an academician to create an eminently entertaining and educational read. Carol Haggas Copyright Â© American Library Association. All rights reserved Review â€œDelightful, rollicking history . . . A fun read, well-supported by