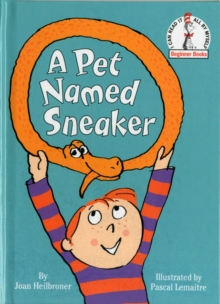 Product Description Fifty years after the publication ofÂ  Robert the Rose Horse comes Joan Heilbroner's second Beginner Bookâ€” A Pet Named Sneaker,Â with illustrations by Pascal Lemaitre.Â A madcap tale reminiscent of The Cat in the Hat, Go, Dog. Go!, and A Fish Out of Water, Sneaker is the story of a pet-store snake who longs for a real home. When he is finally adopted by Peteâ€”a young boy charmed by Sneaker's uncanny ability to twist himself into different shapesâ€”Sneaker not only proves himself a good pet, but proves to be a good student (sneaking into school with Pete and learning to read and write); a good citizen (saving a drowing toddler at a community pool); and a goodwill ambassador for the entire animal kingdom (inspiring the community to open the pool to all animals)! With delightfully understated, wickedly funny illustrations by Pascal Lemaitre, this is a fantastic, funny book that will sneakily get beginning readers reading on their own! Originally created by Dr. Seuss, Beginner Books encourage children to read all by themselves, with simple words and illustrationsÂ that give clues to their meaning. From School Library Journal PreS-Gr 1-Sneaker lives in a pet store and can't seem to find a home no matter how many visitors stop by. Apparently, no one wants to buy a snake, until a boy named Pete takes him home and plays with him and shares snacks and surprises. When Pete goes to school, Sneaker sneaks into his backpack and tags along. He's a big hit with the kids and proves to be a good student, going back day after day. As summer approaches, Pete takes his pet to the local pool where he ends up saving a little boy from drowning. Sneaker soon becomes a local hero and also gets a new career as the pool lifeguard. The vivid drawings and clear cartoon illustrations provide beginning readers with picture clues to help decode the story. A winning addition for most easy-reader collections.-Melissa Smith, Royal Oak Public Library, MI?(c) Copyright 2011. Library Journals LLC, a wholly owned subsidiary of Media Source, Inc. No redistribution permitted. From Booklist In the tradition of misunderstood animals who just want a place to call home, meet Sneaker the snake. After being passed over at the pet store for cuter, cuddlier pets, Sneaker is finally adopted by a boy named Pete. When Sneaker sneaks into Peteâ€™s backpack and accompanies the boy to school, he makes new friends and learns to read. A story with a communicative snake would be expected to provide ample opportunity for hissing text, but there is no such wordplay, as Sneaker only utters a single word, twice, in this Beginner Book: â€œYessssss.â€ Instead, Sneaker lets his actions do the talking as he proves that snakes are not gross and slimy but friendly and helpful. Emerging readers may very well be encouraged by Sneakerâ€™s classroom example as they practice their own reading skills alongside him. Lemaitreâ€™s illustrations are reminiscent of Bernard Wabarâ€™s style, and Sneaker is as winning a reptile as Lyle the Crocodile was before him. Grades K-2. --Kara Dean Review Starred Review, Publishers Weekly, November 12, 2012: â€œTold with easygoing assurance, marvelous economy, and goodhearted humor by two pros, this Beginner Book should sneak its way into the heart of early readers.â€ About the Author JOAN HEILBRONER is best known for her first book, Robert the Rose Horse, which was published in 1961. Acquired by Dr. Seuss when he was editor of Beginner Books, it has been in print for over 50 years. Her inspiration to write A Pet Named Sneaker came from her grandchildren, Quentin and Katrina, and their talented pet snake Plato. A graduate of Columbia University, Ms. Heilbroner worked as a school librarian until her retirement.Â Â  PASCAL LEMAITRE is the illustrator of numerous books for young people, and his editorial work appears regularly in The New Yorker, The New York Times, The New York Times Book Review, Time, and Print. He spends half the year in Brussels, whe