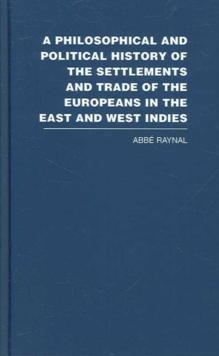 Product description AbbÃ© Raynalâ€™s A Philosophical and Political History of the Settlements and Trade of the Europeans in the East and West Indies is one of the great eighteenth-century histories. It attempts no less than an assessment of European settlement and colonization. The ideas contained within the work, and its savage indictment of slavery and European colonization, lead to its being banned by the French parliament. Despite the ban, the work proved enormously popular and it is of great significance as a key piece of democratic writing in the period leading up to the French Revolution. In making his assessment Raynal undertook a complete survey of trade and settlement in the East and West Indies and the New World. Included are accounts of trade in the Perisan Gulf, Arabia and India; the conquests of the Portuguese and Dutch in the East Indies and Asia; the Spanish conquests in North and South America, the West Indies; the Portuguese conquests of Brazil; and the English and French colonies in North America. The work also contains an account of the American Revolution just six years after it happened. This important work is Raynalâ€™s greatest achievement. It provides both a valuable historical record of European settlement and trade and a searing critique of European colonization. About the Author Abbe Guillaume Thomas Francois Raynal (1713-96) was a French Philosopher, historian and priest. On leaving his parish in Paris, he devoted himself to writing and the society of philosophes. He produced a number of historical works, including this famous history of the European colonies (part of which some modern scholars attribute to Diderot). Abbe Raynal occupied in French literature a position similar to that held by Hume and Gibbon amongst English authors. Among those who admired his writings was the Emporer Napolean.