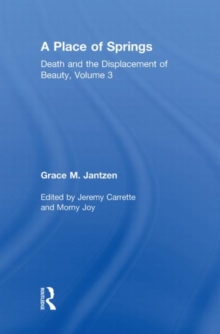 A PLACE OF SPRINGS (DEATH AND THE DISPLACEMENT OF BEAUTY)

Product Description In this book Grace Jantzen constructs a Quaker spirituality of beauty as a theological-philosophical response to a world preoccupied with death and violence. Having mapped the foundations of western cultural violence in the Greco-Roman period and the Judea-Christian tradition in Foundations of Violence and Violence to Eternity, she now offers her alternative vision. This vision is an original and creative feminist reading of the Quaker tradition, considering George Fox and the writings of Quaker women, exploring the themes of inner light and beauty as alternatives to violence and the obstacles to building such an alternative world. After showing how seventeenth-century Quakers offered a different option for modernity, she maps the philosophical and ethical implications of engaging with the world through beauty and its transforming power. Written for everyone interested in contemporary spirtuality, it explains how Quaker ideas can provide a way to transform our violent world into one that celebrates life rather than death, peace rather than violence. This work is the second of two posthumous publications to complete Grace M. Jantzenâ€™s Death and the Displacement of Beauty collection, which began with Foundations of Violence (Routledge, 2004). Review "This is a critically important volume, the third in Grace Jantzen's grand and compelling invitation to a new moral imaginary. It is about choosing life over modernity's preoccupation with death, about opening ourselves to beauty and the need to be vulnerable that is part of that aesthetic. From her own engaged 21st century Quaker perspective, Jantzen offers us this new paradigm that both transcends modernity with its anxieties and fears about beauty, and subverts it with her focus on the inner spiritual dynamic of the Quaker conception of Light. Whilst we always may hope for what else might have been in the writing we will now never see, this book seals our ability to respond and encourages us to do so with urgency. In good Quaker tradition, this is prophecy at its best." - 'Ben' Pink Dandelion, Professor of Quaker Studies, University of Birmingham, UK "Remarkably coherent and polished... This creative work is both fascinating and potentially fruitful." - Rhiannon Grant, University of Leeds, UK, Quaker Studies About the Author The late Grace M. Jantzen (1948-2006) was Professor of Religion, Culture and Gender at Manchester University and a widely respected feminist philosopher and theologian. Jeremy Carrette is Professor in the Department of Religious Studies at the University of Kent and is the author of Selling Spirituality (Routledge, 2005) and Religion and Critical Psychology (Routledge, 2007). Morny Joy is University Professor in the Department of Religious Studies at the University of Calgary. She is author of Divine Love: Luce Irigaray, Women, Gender and Religion (2007).