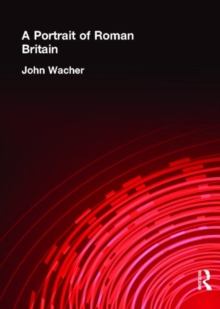 A PORTRAIT OF ROMAN BRITAIN

Product description The Romans occupied Britain for almost four hundred years, and their influence is still all around us - in the shape of individual monuments such as Hadrians Wall, the palace at Fishbourne and the spa complex at Bath, as well as in subtler things such as the layout and locations of ancient towns such as London, Canterbury and Colchester, and the routes of many major roads. Yet this evidence can only suggest a small proportion of the effect that the Romans had on the landscape of Britain. A Portrait of Roman Britain breaks new ground in enabling us to visualise the changes in town and countryside brought by Roman military and civilian needs. Using clear, well-documented descriptions, John Wacher answers questions such as: * were Roman towns as neat and tidy as they are often represented? * how much woodland was needed to fuel the bath houses of Roman Britain? * how much land did a Roman cavalry regiment require for its horses?^ Review "This volume makes a genuine contribution to the Routledge series on Roman Britain and to the vaster literature on this subject." - R.P. Legon, University of Baltimore About the Author John Wacher is Emeritus Professor of Archaeology at the University of Leicester. He is a member of the Institute of Field Archaeologists and has a special interest in urbanisation in the Roman Empire. Among his many publications are The Towns of Roman Britain (Routledge 2nd edition 1997), Roman Britain (2nd edition 1998), and The Roman World (Routledge Kegan Paul 1987).