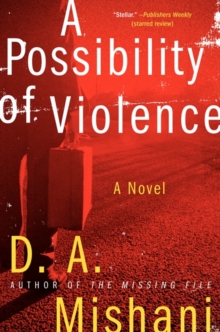 A POSSIBILITY OF VIOLENCE: A NOVEL (AVRAHAM AVRAHAM SERIES)

by: D. A. Mishani
Format: Hardcover

Haunted by the past and his own limitations, Israeli Detective Avraham Avraham must stop a criminal ruthless enough to target children in this evocative and gripping tale of mystery and psychological suspense that is the follow-up to The Missing File, the acclaimed first novel in D. A. Mishaniâ€™s literary crime series that was shortlisted for the CWA International Dagger Award.

An explosive device is found in a suitcase near a daycare center in a quiet suburb of Tel Aviv. A few hours later, a threat is received: the suitcase was only the beginning.

Inspector Avraham Avraham, back in Israel after a much-needed vacation, is assigned to the investigation. Tormented by the trauma and failure of his past case, Avraham is determined not to make the same mistakesâ€”especially with innocent lives at stake. He may have a break when one of the suspects, a father of two, appears to have gone on the run. Is he the terrorist behind the threat? Is he trying to escape Avrahamâ€™s intense investigation? Or perhaps heâ€™s fleeing a far more terrible crime that no one knows has been committed?

No matter how much Avraham wants to atone for the past, redemption may not be possibleâ€”not when heâ€™s entangled in a case more deceptive and abominable than any heâ€™s ever faced.