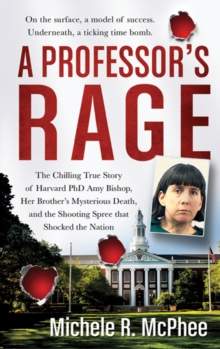 A PROFESSOR'S RAGE: THE CHILLING TRUE STORY OF HARVARD PHD AMY BISHOP, HER BROTHER'S MYSTERIOUS DEATH, AND THE SHOOTING SPREE THAT SHOCKED THE NATION

A devoted wife and mother and a Harvard-educated scientist working as a biology professor at the University of Alabamaâ€“Huntsville, Amy Bishop seemed to have it all. But when she was denied tenure, her whole world came crashing downâ€¦and she reacted in a way no one ever could have imagined.

On February 13, 2010, Amy was charged with murder for opening fire in a staff meeting the day before, killing three colleagues and injuring others. How could one woman's fury unleash such destruction? While the campus massacre made national headlines, authorities began a thorough investigation and uncovered another chilling episode in Amy's past.

When she was twenty-one, Amy fatally shot her teenage brother, Seth. His death was ruled an accident?and no charges were pressed. But for many involved in the case, Amy's story didn't add up, and law-enforcement officials suspected it was murderâ€¦After the Huntsville rampage, the cold case was reopened and Amy would find herself charged with killing her own brother?murder in the first degree. If Amy had been found guilty twenty-four years earlier, three lives might have been saved.

A Professor's Rage is the chilling true story of an intelligent woman with a secret past ... a past that would burst out in a shocking killing.