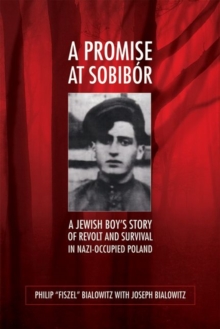 A PROMISE AT SOBIBóR: A JEWISH BOY’S STORY OF REVOLT AND SURVIVAL IN NAZI-OCCUPIED POLAND

A Promise at SobibÃ³r is the story of Fiszel Bialowitz, a teenaged Polish Jew who escaped the Nazi gas chambers. Between April 1942 and October 1943, about 250,000 Jews from European countries and the Soviet Union were sent to the Nazi death camp at SobibÃ³r in occupied Poland. SobibÃ³r was not a transit camp or work camp: its sole purpose was efficient mass murder. On October 14, 1943, approximately half of the 650 or so prisoners still alive at SobibÃ³r undertook a daring and precisely planned revolt, killing SS officers and fleeing through minefields and machine-gun fire into the surrounding forests, farms, and towns. Only about forty-two of them, including Fiszel, are known to have survived to the end of the war.
Â Â  Â Philip (Fiszel) Bialowitz, now an American citizen, tells his eyewitness story here in the real-time perspective of his own boyhood, from his childhood before the war and his internment in the brutal Izbica ghetto to his harrowing six months at SobibÃ³râ€”including his involvement in the revolt and desperate mass escapeâ€”and his rescue by courageous Polish farmers. He also recounts the challenges of life following the war as a teenaged displaced person, and his eventual efforts as a witness to the truth of the Holocaust.
Â Â  Â In 1943 the heroic leaders of the revolt at SobibÃ³r, Sasha Perchersky and Leon Feldhendler, implored fellow prisoners to promise that anyone who survived would tell the story of SobibÃ³r: not just of the horrific atrocities committed there, but of the courage and humanity of those who fought back. Bialowitz has kept that promise.

Best Books for General Audiences, selected by the American Association for School Libraries

Best Books for High Schools, selected by the American Association for School Libraries