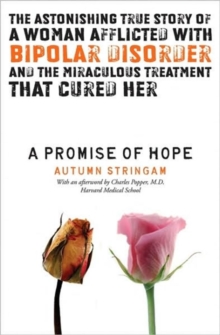 A PROMISE OF HOPE

Product Description Bipolar disorder runs in Autumn Stringamâ€™s family. Autumn and her younger brother inherited the mental illness, and they and their families suffered terribly as a result. In the poignant, fascinating, and remarkable A Promise of Hope, Autumn describes their amazing recovery through their fatherâ€™s incredible discovery, one that has helped her, her brother, and thousands of other North Americans. From the Back Cover Bipolar disorder runs in Autumn Stringamâ€™s family. Autumn and her younger brother unfortunately inherited the mental illness, but recovered through the incredible discovery by her father of a cure that has helped them and thousands of others. Some children inherit the family nose. Autumn Stringam and her brother Joseph inherited bipolar disorder, a severe mental illness that led to the suicides of their mother and grandfather. Autumn, at 22, was psychotic and in a psychiatric hospital on suicide watch; Joseph, at 15, was prone to violent episodes so terrifying the family feared for their lives. But after they began taking a nutritional supplement developed by their father-and based, incredibly, on a formula given to aggressive hogs-Autumnâ€™s and Josephâ€™s symptoms disappeared. Today they both lead normal, productive lives. A Promise of Hopechronicles Autumn Stringamâ€™s personal flight from madness to wellness and also provides an astonishing scientific account of an innovative treatment that moves from a kitchen table in Alberta to the offices of a distinguished Harvard psychiatrist and into the labs of a skeptical medical establishment. Now updated with the groundbreaking results of a clinical trial and with additional content from the perspective of Autumnâ€™s family, A Promise of Hope is a powerful call for a new understanding of the mental illness that affects so many people. About the Author AUTUMN STRINGAM is the second of nine children born to a mother who suffered from bipolar affective disorder; she developed the same illness. The story of her remarkable treatment was featured in a one-hour documentary titled Impossible Cure?, which aired across the U.S. and Canada on the Discovery Health Channel. A s a public speaker, author of mental health resources and political advocate for the mentally ill, she has spread the hope of recovery to thousands of other Canadians and a growing worldwide audience. Autumn Stringam lives in Coaldale, Alberta, with her husband and four children.