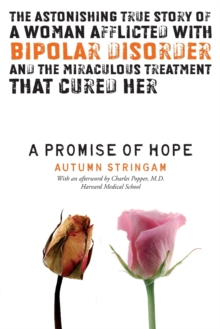 A PROMISE OF HOPE: THE ASTONISHING TRUE STORY OF A WOMAN AFFLICTED WITH BIPOLAR DISORDER AND THE MIRACULOUS TREATMENT THAT CURED HER

Product Description Some children inherit "the family nose." Autumn Stringam and her brother Joseph inherited the family bipolar disorder, a severe mental illness that led to their mother's and grandfather's suicides. Autumn, at 22, was psychotic and in in a psychiatric hospital on suicide watch; Joseph, at 15, was prone to violent episodes so terrifying the family feared for their lives. But after they began taking a nutritional supplement developed by their father and based, incredibly, on a formula given to aggressive hogs--Autumn's and Joseph's symptoms disappeared. Today they both lead normal, productive lives. A Promise of Hope is the personal story of Autumn Stringam's flight from madness to wellness, all due to the vitamin and mineral supplement that works on the premise that some forms of mental illness are caused by nutritional deficiencies. An honest book that exposes the hidden torment of bipolar disorder, it is the story of a daughter seeking to forgive her mother. A Promise of Hope is also an astonishing scientific account that moves from a kitchen table in Alberta to the treatment offices of a distinguished Harvard pshyciatrist and into the labs of a skeptical medial establishment. It climaxes in a bitter--but eventually triumphant--battles with Health Canada, in which the tiny supplement company is exonerated and praised for saving the lives of thousands of Canadians previously thought lost to mental illness. More than anything, A Promise of Hope is a powerful story and a call for a new understanding of the causes of mental illness and its treatments. 20% of Canadians will experience mental illness in their lifetimes Over 300,000 Canadians are affected by bipolar disorder (or manic depression) 15% of people with biploar disorder commit suicide EMPower Plus, the supplement that worked for Autumn, is being used and studied around the world, reflecting the growing awareness of the role of micronutrients in normal brain function. About the Author AUTUMN STRINGAM is the second of nine children born to a mother who suffered from bipolar affective disorder; she developed the same illness. The story of her remarkable treatment was featured in a one-hour documentary titled Impossible Cure?, which aired across the U.S. and Canada on the Discovery Health Channel. A s a public speaker, author of mental health resources and political advocate for the mentally ill, she has spread the hope of recovery to thousands of other Canadians and a growing worldwide audience. Autumn Stringam lives in Coaldale, Alberta, with her husband and four children.