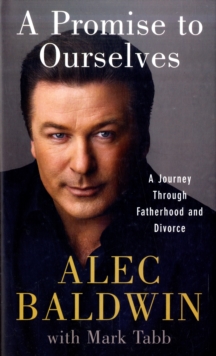 A PROMISE TO OURSELVES: A JOURNEY THROUGH FATHERHOOD AND DIVORCE

Product Description â€œI have been through some of the worst of contentious divorce litigation,â€ Alec Baldwin declares in A Promise to Ourselves. Using a very personal approach, he offers practical guidance to help others avoid the anguish he has endured.An Academy and Tony Award nominee and a 2007 recipient of Golden Globe, SAG, and Television Critics Association Awards for best actor in a comedy, Alec Baldwin is one of the best-known, most successful actors in the world. His relationship with Kim Basinger, the Academy Awardâ€“winning actress, lasted nearly a decade. They have a daughter named Ireland, and for a time, theirs seemed to be the model of a successful Hollywood marriage. But in 2000 they separated and in 2002 divorced. Their split---specifically the custody battle surrounding Ireland---would be the subject of media attention for years to come.In his own life and othersâ€™, Baldwin has seen the heavy toll that divorce can take---psychologically, emotionally, and financially. He has been extensively involved in divorce litigation, and he has witnessed the way that noncustodial parents, especially fathers, are often forced to abandon hopes of equitable rights when it comes to their children. He makes a powerful case for reexamining and changing the way divorce and child custody is decided in this country and levels a scathing attack at what he calls the â€œfamily law industry.â€When it comes to his experiences with judges, court-appointed therapists, and lawyers, Baldwin pulls no punches. He casts a light on his own divorce and the way the current family law system affected him, his ex-wife, and his daughter, as well as many other families. This is an important, informative, and deeply felt book on a contentious subject that offers hope of finding a better way. About the Author Alec Baldwin graduated with a BFA from New York University. As an actor, he has been nominated for a Tony Award and an Oscar, and has received an Emmy. He stars in the award-winning television series 30 Rock on NBC. Excerpt. Â© Reprinted by permission. All rights reserved. Introduction I NEVER WANTED TO write this book. Although my experiences with judges, lawyers, and court-ordered therapists during my own high conflict divorce proceedings left me outraged over the injustices I believe are endemic to the family law system in our society, I had no desire to revisit them. The pain I suffered, the fear of and anger I felt toward nearly all of the principals involved, and the inescapable sense of helplessness and isolation exhausted me. However, to live inside the divorce matrix, to be engaged in that battle, ultimately means to be poised to tell your story, to make your point, to argue your side at a momentâ€™s notice. It is a fire that is constantly burning. These feelings moved me to share my own experiences with nearly any kindred spirit who broached the subject. In restaurants, ticket lines, airplanes, menâ€™s locker rooms, wherever I might be, when that particular conversation started, the facts of my own case would spill out in a torrent. Other times I would sit and listen for hours, grateful for the opportunity to allow someone else to unburden themselves. I could never tell my story urgently enough, and I never tired of the subject of divorceâ€™s iniquities. I believed that a book on the subject would write itself. Eventually, that would change. The passion I had for this issue dried up. The ideas and stories, once so fresh in my mind that I thought they would pour out of me and onto the page like a Pollock painting, began to fade. For three years I had told my story, each recitation as fresh as the first. But any normal human being has a limited capacity for ongoing conflict, and I believed I had reached mine. I have heard people use terms like spent and hollowed out to describe the ultimate result of protracted divorce litigation. Sadly, I have learned that little of this is hyperbole. Divorce litigation becomes like the island of Dr