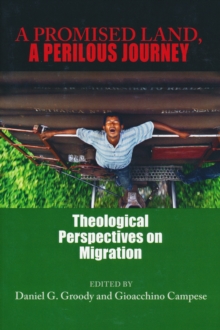 A PROMISED LAND, A PERILOUS JOURNEY: THEOLOGICAL PERSPECTIVES ON MIGRATION

Product Description The nineteen authors in this collection recognize that one characteristic of globalization is the movement not only of goods and ideas but also of people. The crossing of geographical borders confronts Christians, as well as all citizens, with choices: between national security and human insecurity, between sovereign national rights and human rights, between citizenship and discipleship. Bearing these global dimensions in mind, the essays in this book focus on the particular problems of immigration across the U.S.-Mexico border. The contributors to this volume include scholars as well as pastors and lay people involved in immigration aid work. Contributors: Oscar AndrÃ©s Cardinal RodrÃ­guez, Gioacchino Campese, Daniel G. Groody, Jacqueline Hagan, Donald Senior, Peter C. Phan, Alex Nava, Gustavo GutiÃ©rrez, Stephen Bevans, Robert Schreiter, Giovanni Graziano Tassello, Patrick Murphy, Robin Hoover, Graziano Battistella, Donald Kerwin, RaÃºl Fornet-Betancourt, Olivia Ruiz Marrujo, and Jorge E. Castillo Guerra. Review â€œAt times saddening, at times inspiring, A Promised Land, A Perilous Journey brings fresh perspectives to the discussion of immigration. These essays reach beyond the policy debate and the heated emotions of the moment and provide much needed reflection on larger truths.â€ (Roberto Suro, University of Southern California) â€œGroody and Campese have assembled 17 essays from an international body of Roman Catholic scholars, religious and lay practitioners. The predominant note is . . . one of human rights advocacy in the light of the liberating Godâ€™s option for the poor. . . . There is ample demonstration that theological reflection engages the real situation on the ground to afford an outsider to the debates insight into the deadly plight of migrants on the U.S.-Mexico border.â€ (Studies in Christian Ethics) â€œThe editors of this volume have gathered together many leading figures within Christian theological circles to reflect on an urgent issue in our world?migration. The articles range from those that are quite academically technical to those that are more generally accessible. There are several outstanding articles that should not be missed.â€ (Multicultural Review) â€œOne can hardly find . . . a serious discussion of the human dignity and rights of the migrants who cross international borders to find work or join family. A Promised Land, A Perilous Journey, a compilation of essays taking a theological and rights-based approach to the issue of migration, provides a needed framework to begin that discussion. Comprised of pieces from a wide range of scholars, advocates and service providers, it engages the contemporary immigration debate from a faith-based, Catholic perspective. . . . [A] useful resource for Catholics (and others) who want to reach beyond the dehumanizing language of the national immigration debate and articulate a vision of the migrant as a human being created in Godâ€™s image.â€ (America) â€œThis book offers fresh and much-needed approaches to migration, providing convincing support for the notion that any serious study of migration, especially with respect to Latinos/as in the United States, must include religious and theological considerations.â€ (Theological Studies) â€œThe book should be read by anyone interested in acquiring a deeper grasp of the complex issues surrounding the border and immigration; it succeeds in its task of proposing a theology growing out of the experience of immigrants. . . . A Promised Land is an important contribution to the development of a full and robust theology of migration.â€ (The Journal of Markets and Morality) â€œ A Promised Land, A Perilous Journey offers a rich, interdisciplinary treatment of the subject of migration, showing the human face of contemporary migration as a global phenomenon. The authors explore historical antecedents in biblical and early church history, the political debates about borders and the right to migrate, and the role of rac