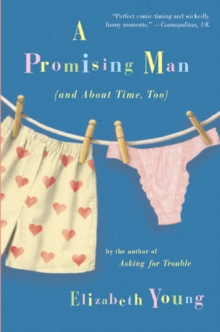 A PROMISING MAN (AND ABOUT TIME, TOO)

Product Description From the fire-hot author of Asking for Trouble comes a second irresistibly funny and romantic novel, in which we meet the delightfully wicked Harriet and John, who are matched as perfectly as scones and clotted cream -- if only Harriet would let herself indulge. Up to her eyeballs in her friends' dramas, Harriet Grey has no time for her own, let alone getting entangled with John Mackenzie. And though it's been ages since she's met one of the most gorgeous men London has to offer, it seems John's entangled with someone else. Or is he? Though they say all's fair in love, Harriet isn't about to complicate her life -- or risk her heart. But the persistent John seems to pop up everywhere she turns, and soon she's agreeing to meet him for a cocktail to repay a favor. After all, what harm can come out of one innocent little drink? Maybe a few breathtaking kisses, some suspiciously lingering embraces, and a wonderful weak-kneed dizziness that most definitely is not the flu. And that's before she finds herself all alone with John at Christmas. . From Publishers Weekly This rollicking British romance by the author of Asking for Trouble finds 29-year-old smart-mouthed Harriet in an awkward position. She hasn't set out to get involved with John Mackenzie, the boyfriend of her old schoolmate Nina, a stunningly successful beauty whom she's envied for years. But Harriet and John strike up a conversation, crack a few jokes, bond over a spilled drink, and the rest is history. And what kind of saint could resist such an opportunity to make Nina squirm? But little lies and big misunderstandings pile up as Harriet continues to see the almost too-good-to-be-true "gorgeous bloke." Though there are no revelations here, Young does plumb the joys and absurdities of contemporary romance with flair. Harriet's engaging group of friends-housemate Sally, whose one-night stand on holiday left her with a child; Jacko, Harriet's former school chum, surrogate brother and occasional house guest, who is constantly bickering with Sally; and next door neighbor Helen, whose husband left her and her children for a younger woman-provoke laughs and sympathy as they muddle through singledom. Harriet also manages a great balancing act between the vagaries of her own life and that of her divorced parents, each of whom has found new partners. Scenes and conversations can sometimes drag on longer than necessary, and Young's humor is of the gentle-rather than piercing-variety. But for the most part, she holds her own against the likes of Anna Maxted and Helen Fielding. Copyright 2002 Reed Business Information, Inc. About the Author Elizabeth Young started writing after holding a variety of jobs that included modeling for TV commercials in Cyprus and working for the Sultan's Armed Forces in Oman. She has two daughters and lives in Surrey with her husband who never once told her to forget writing and get a "proper" job.