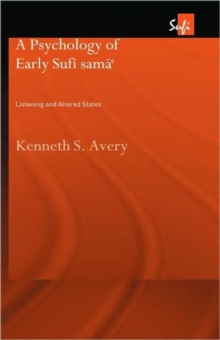 AveryÂ explores the psychology of altered states among the early Sufis. It examines samÃ¢` - listening to ritual recitation, music and certain other aural phenomena - and its effect in inducing unusual states of consciousness and behaviours. The focus is on the earliest personalities of the Islamic mystical tradition, as mediated by texts from theÂ tenth to theÂ twelfth centuries C.E. These unusual states are interpreted in the light of current research in Western psychology, and also in terms of their integration into historical Islamic culture.

A Psychology of Early Sufi SamÃ¢` provides new insights into the work of five Sufi authors, and a fresh approach to the relation between historical accounts of altered states and current psychological thinking.