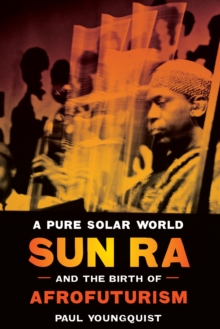 A PURE SOLAR WORLD: SUN RA AND THE BIRTH OF AFROFUTURISM (DISCOVERING AMERICA)

Product Description Sun Ra said he came from Saturn. Known on earth for his inventive music and extravagant stage shows, he pioneered free-form improvisation in an ensemble setting with the devoted band he called the â€œArkestra.â€ Sun Ra took jazz from the inner city to outer space, infusing traditional swing with far-out harmonies, rhythms, and sounds. Described as the father of Afrofuturism, Sun Ra created â€œspace musicâ€ as a means of building a better future for American blacks here on earth. A Pure Solar World: Sun Ra and the Birth of Afrofuturism offers a spirited introduction to the life and work of this legendary but underappreciated musician, composer, and poet. Paul Youngquist explores and assesses Sun Raâ€™s wide-ranging creative outputâ€”music, public preaching, graphic design, film and stage performance, and poetryâ€”and connects his diverse undertakings to the culture and politics of his times, including the space race, the rise of technocracy, the civil rights movement, and even space-age bachelor-pad music. By thoroughly examining the astro-black mythology that Sun Ra espoused, Youngquist masterfully demonstrates that he offered both a holistic response to a planet desperately in need of new visions and vibrations and a new kind of political activism that used popular culture to advance social change. In a nation obsessed with space and confused about race, Sun Ra aimed not just at assimilation for the socially disfranchised but even more at a wholesale transformation of American society and a more creative, egalitarian world. Review "Youngquist has published an excellent critical take on Sun Raâ€™s creation myth and its relation to broader currents of Americaâ€™s postwar social imaginary. " ( PopMatters 2016-12-08) "[Youngquist] writes with spirited engagement: like much of the best writing on Sun Ra, he is an unapologetic convert, and there is a winning evangelism to his analysis. . . . his writing is fired by the sense that Sun Ra's musical metaphysic truly matters in the here and now." ( The Wire 2017-02-01) "The title is well chosen. Sun Raâ€™s legacy is as much the vision of another world, and another way of being, as it is a unique approach to music. . . . [His] relationship with pop culture is equally fascinating and the impact he made on a wide range of artists who achieved far greater mainstream commercial success . . . is significant to say the least. Youngquistâ€™s prose is vivid and concise, making a subject some might still find forbidding anything but. A welcome invitation to the spaceways." ( Jazzwise) "Sun Ra left Earth a better place than he found it. Youngquistâ€™s deep dive into this art is creative, discursive, and probing. . . . A strictly formal critique of the musician would have generated its own insights, but by pulling the music of Sun Ra into its broader context, Youngquist engages readers in something grander. Theyâ€”both Sun Ra and Youngquistâ€”give the contentious politics of resistance, the starlit frontiers of imagination, and the contours of hope a fresh look. As Sun Ra would agree, it is only a fresh look at our world that will rocket people to a new and more splendid universe." ( Rain Taxi 2017-05-01) "I am bowled over. Youngquist explainsâ€”better than anyone before and, in many particular regards, for the first timeâ€”how Sun Raâ€™s poetically logical illogic and musically purposeful nothingness offered, and offers, a pathway for escaping the often-degrading experience of being African American in America. Youngquist dances seamlessly between hip insider talk and scholarly observation, between fiction and history, between celebration and criticism. This book is terrific, sensational. What a delight." (Barry Kernfeld, editor of The New Grove Dictionary of Jazz and author of What to Listen for in Jazz) "A Pure Solar World is a major accomplishment. Working through the tangle of incomplete and misleading information surrounding Sun Ra and Saturn Records, Paul Youngquist provides the most thoroug