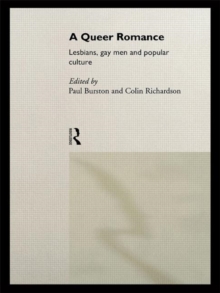 Product Description It's here and it's queer - popular culture inhabits all our lives, whether it comes in the form of movies or magazines, TV or shopping. A Queer Romance brings together critics, writers and artists to debate the possibilites of popular culture for lesbians and gay men. In a collection that is in-yer-face but never out-to-lunch, the contributors variously revisit debates about the gaze to provide a new theory of Queer viewing; discuss texts coded as queer - from lesbian vampires to Hollywood's use of gay codes in mainstream films such as Top Gun and Black Widow; consider the sexual and cultural narratives at play in the world of home shopping catalogues; explore the pleasures and perils of gay cultural production, from the radically queer film-making of Monika Treut to the wild world of homocore fanzines, and address the possibilities of texts claiming to be for the gay spectator - from pornography `by women, for women and about women' to `Out' TV. The contributors to A Queer Romance don't all agree but, taken together, the collection argues strongly that everyone can have their queer moments. About the Author Paul Burston edits Time Out's gay section and Colin Richardson is Assistant Editor of Gay Times.