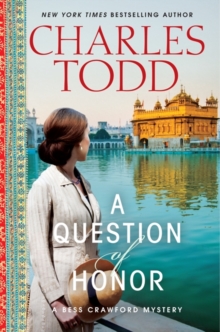 A QUESTION OF HONOR

Product Description In the latest mystery from New York Times bestselling author Charles Todd, World War I nurse and amateur sleuth Bess Crawford investigates an old murder that occurred during her childhood in India, and begins a search for the truth that will transform her and leave her pondering a troubling question: How can facts lie? In 1908, when a young Bess Crawford lived in India, an unforgettable incident darkened the otherwise happy time. Her father's regiment discovered it had a murderer in its ranks, an officer who killed five people yet was never brought to trial. A decade later, tending to the wounded on the battlefields of France during World War I, Bess learns from a dying man that the alleged murderer, Lieutenant Wade, is alive and serving at the Front. According to reliable reports, he'd died years before, so how did Wade escape India? What drove a good man to murder in cold blood? Bess uses her leave to investigate. But when she stumbles on the horrific truth, she is shaken to her very core. The facts reveal a reality that could have been her own fate. Amazon.com Review Author One-on-One: Charles Todd and Deborah Crombie is the bestselling author of 15 mystery novels featuring Scotland Yard Detective Inspector James, and Detective Superintendent Kincaid, including her latest, The Sound of Broken Glass . Deborah Crombie: Even though this is the fifth book in the "Bess Crawford" mystery series, it reads like a stand-alone novel. What's your trick to writing a series novel that can be enjoyed by a newcomer as well as a fan? Charles Todd: We try to put ourselves in the readersâ€™ shoes, so that he or she can start the series anywhere, and still feel right at home. That means concentrating on the current plot and setting, to make it as exciting as if it were the first time Bess ever tried to solve a mystery. That keeps the character fresh too, because our enthusiasm for Bess comes through. DC: There is a wonderful subtext to the relationship between Bess, the WWI battlefield nurse, and Simon, her father's right-hand man in the military. What's really going on there? CT: Simon and Bess havenâ€™t told us yet. Thereâ€™s most certainly chemistry there, a lot of it. Perhaps it hasnâ€™t dawned on them yet that there might be something more between them. Still, every once in a while, a twinge of jealousy crops upâ€¦ DC: The scenes of the British Army in India during the Colonial era (which form the background for the current story) are so colorful and fascinating, not the usual stuff of a mystery series. What inspired you to give Bess and her family a history in India? CT: India made Bess such an intriguing character to work with. We didnâ€™t want her to be a staid Victorian. Instead she experiences Army life and understands duty. Her education includes a different, exotic culture. And the memory of the 1857 Indian Mutiny is always fresh, a constant reminder of danger. If youâ€™re going to write about a woman who can stand on her own two feet, there has to be an explanation of how she learned to be so independent. A traditional background wouldnâ€™t have worked. DC: Will Bess ever meet up with Inspector Rutledge, the protagonist of your other mystery series? CT: So far, we havenâ€™t come up with any good reason for letting them meet. But there is one character who is in both seriesâ€”Melinda Crawford. Sheâ€™s a cousin of Bessâ€™s family and has an Army background in India herself. Sheâ€™s also a close friend of Rutledgeâ€™s family. Who knows if sheâ€™ll ever introduce these two? And what will Simon have to say to that? DC: Bess is such a wonderful character, she feels so contemporary while still being true to her time. She has a real talent of drawing information out of others. What--or who--was your inspiration for Bess? CT: The familiar Victorian woman, repressed and living under the thumb of her father and then her husband, is only one side of the picture. Intrepid Englishwomen traveled the world as missionaries or like Melinda C