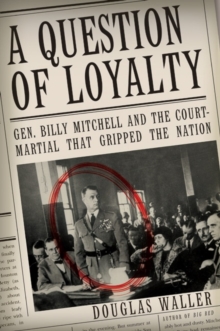 A QUESTION OF LOYALTY: GEN. BILLY MITCHELL AND THE COURT-MARTIAL THAT GRIPPED THE NATION

Product Description It had all the ingredients of a movie drama:a scandal that grips Washington and touches the White House; bitter battles and backroom intrigue at the highest levels of the U.S. military; glamorous women who make or break the careers of powerful men; a high-stakes trial with a celebrity defendant who captures the nation's attention ... A Question of Loyalty plunges into the seven-week Washington trial of Gen. William "Billy" Mitchell, the hero of the U.S. Army Air Service during World War I and the man who proved in 1921 that planes could sink a battleship. In 1925 Mitchell was frustrated by the slow pace of aviation development, and he sparked a political firestorm, accusing the army and navy high commands, and by inference the president, of treason and criminal negligence in the way they conducted national defense. He was put on trial for insubordination in a spectacular court-martial that became a national obsession during the Roaring Twenties. Douglas Waller has crafted a compelling new biography of the daring Billy Mitchell, a larger-than-life figure remembered as much for his outspokenness as for his innovations in the use of airpower. Waller has uncovered a trove of new letters, diaries, and confidential documents that have enabled him to capture in detail the drama of the court and to build a rich and revealing biography of Mitchell, one of the army's most controversial and flamboyant generals. Born to a millionaire Midwest family at the end of the 1870s, Mitchell joined the military at the age of eighteen and became one of its rising stars. During World War I, he led the largest armada of airplanes ever to attack an enemy force and returned to the United States a dashing young general with a chest full of medals and a radical vision of airpower as the only decisive instrument for future wars. But as the military shrank in the postwar years, Mitchell became increasingly impatient and vocal, lashing out at bureaucratic enemies he accused of impeding airpower's progress. After a tragic airship accident that shocked the nation, he publicly blasted the War and Navy Departments for their handling of aviation and was put on trial for it. A Question of Loyalty is a story about Washington politics, about love and betrayal, about heroes in battle, about determined lawyers and powerful military men pitted against one another in a courtroom. From Publishers Weekly A superb and charismatic Signal Corps officer and innovative air tactician in WWI, Mitchell, the son of a Wisconsin senator, faced an internal conflict: should he be loyal to his superior officers, whom he regarded as almost treasonably incompetent, or to what he saw as his country's best interests, which included a vastly larger, united and independent air arm? The result was a famous court-martial, which Time magazine correspondent Waller ( The Commandos), with scholarship and balance, makes extremely comprehensible and gripping to readers more than 75 years on. The shorter biographical portion portrays Mitchell as egotistical, insubordinate, a so-so pilot, a racist, a spendthrift and borderline alcoholic, and heavily responsible in a messy divorce from his first wife. The trial itself was a media circus of modern proportions; Mitchell emerges as somewhat more than a gadfly if something less than a hero, essential to the growth of modern American air power but hardly a spotless martyr or a major strategic thinker. Copyright Â© Reed Business Information, a division of Reed Elsevier Inc. All rights reserved. From Bookmarks Magazine As detailed in Waller?s exhaustively researched book, Mitchell?s 1925 court-martial remains a riveting saga nearly 80 years after the fact. By weaving together biography, courtroom drama, and early 20th-century political and military history, Waller rescues from obscurity both the sensational 34-day trial and its larger-than-life star. Under the author?s even-handed treatment, Mitchell emerges as a complex character