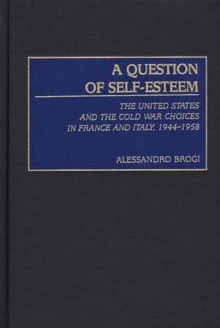 A QUESTION OF SELF-ESTEEM: THE UNITED STATES AND THE COLD WAR CHOICES IN FRANCE AND ITALY, 1944-1958

Using archival materials from all three nations, this first comparative study of French and Italian relations with the United States during the early Cold War shows that French and Italian ambitions of status, or prestige, crucially affected the formation of the Western Alliance. While attention to outside appearances had a long historic tradition for both European nations, the notion was compounded by their humiliation in World War II and their consequent fear of further demotion. Only by promoting an American hegemony over Europe could France and Italy aspire respectively to attain continental leadership and equality with the other great European powers. For its part, Washington carefully calibrated concessions of mere status with the more substantial issues of international roles.

A recent trend in both U.S. and European historiography of the Cold War has emphasized the role that America's allies had in shaping the post-World War II international system. Combining diplomatic, strategic, economic, and cultural insights, and reassessing the main events from post-war reconstruction to the Middle Eastern crises of the late 1950s, Brogi reaches two major conclusions: that the United States helped the two allies to recover enough self-esteem to cope with their own decline; and that both the French and the Italian leaders, with constant pressure from Washington, progressively adapted to a notion of prestige no longer based solely on nationalism, but also on their capacity to promote, or even master, continental integration. With this focus on image, Brogi finally suggests a background to today's changing patterns of international relations, as civilizational values become increasingly important at the expense of more familiar indices of economic and military power.