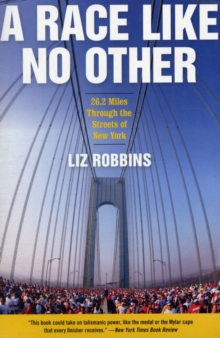 A RACE LIKE NO OTHER: 26.2 MILES THROUGH THE STREETS OF NEW YORK

Product Description â€œGets closer to this marathon than an avenue railbird, and it leaves impressions not fleeting, but lasting.â€ â€”Sports IllustratedThe New York City Marathon is considered one of the nationâ€™sâ€”and the world'sâ€”premier sporting events. AÂ reporterÂ for the New York Times, Liz Robbins brings the color, the history, the electricity of this remarkable annual competitionÂ alive in A Race Like No Other. Centering her narrative around the fabled 2007 running, Robbins captures all the intensity of the grand event, following the runnersâ€”both professional and amateurâ€”along 26.2 grueling miles through the streets of New York, from the starting line at the Verrazano Narrows Bridge to the finish line in Central Park, and offering fascinating portraits of marathon legends like theÂ race's charismatic founder, the late Fred Lebow, and nine-time champion Grete Waitz. The Wall Street Journal raves: â€œRobbins nails the race, painting a broad, impressionistic portrait of what I consider New Yorkâ€™s greatest day.â€ No other book captures the excitement of the New YorkÂ City Marathon like A Race Like No Other. Review â€œRobbins, a sportswriter for The New York Times, has packed her book with scrumptious detailsâ€¦If the written word still has any force, then this book could take on talismanic power, like the medal or the Mylar cape that every finisher receives.â€ ( New York Times Book Review) â€œRobbinsâ€™s absorbing book...finds its stride....A Race Like No Other gets closer to this marathon than an avenue railbird, and it leaves impressions not fleeting, but lasting.â€ (Sports Illustrated) â€œI found this fabulous history of the New York City Marathon fascinating because Robbins brings to life the incredible pressures runners are under, as well as explaining their training methods and introducing us to their intense rivalries and friendshipsâ€¦.Whether youâ€™re a runner or a couch potato, this will make you at the very least want to watch the marathon, armed with a sense of what each and every mile means to the thousands of competitors who run them.â€ (Penthouse) â€œThis book brings the race alive, detailing the running of the 2007 Marathon through the stories of the runners themselves...You wonâ€™t stop reading â€˜til theyâ€™ve crossed the finish line.â€ (Best Health Magazine) â€œRobbins, who covers sports for the New York Times, offers a vivid, winning portrait of the New York City Marathon, now the largest in the world with nearly 40,000 participants. Taking the 2007 race mile by mile, Robbins profiles each of the principal elite runners, including their training regimens and personal stories; describes each mileâ€™s particular features; limns a large cast of supporting characters, from an aid-station volunteer to a gospel choir that performs inspirational music for the marathoners on the eighth mile; and gives an good overview of how the event is organized. Along the way, Robbins conveys an intimate sense of the physical demands the race places on the body, all the while building suspense-though we know the winners-thatâ€™s the equal of a good action movie. A quality piece of journalism from start to finish.â€â€ ( Booklist (starred review)) â€œIf you canâ€™t make the trek from Fort Wadsworth to Central Park, and canâ€™t get there to watch it in person, this new account of the worldâ€™s biggest marathon is the next best source of inspiration.â€ (The Advocate) â€œAn engrossing, edifying and moving chronicle of a day in the life of the marathon and its participants.â€¦[Robbins] is a master of her craft: she deftly combines historical fact with creative interpretation, statistics and time-splits with detailed descriptionâ€¦.A Race Like No Other is a satisfying read for many reasons, not least because Robbinsâ€™ writing is fluid and engaging, and she offers an unprecedented inside look at the storied event.â€ ( BookPage) â€œWhether you have run the New York City Marathon or not, or even any marathon, you will likely be inspired and encouraged by the stories in A Race Like No Othe