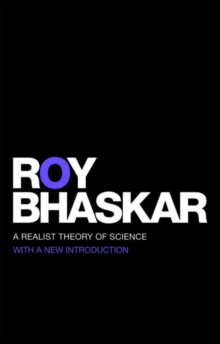 Product description Now acknowledged as a classic in the philosophy of science, A Realist Theory of Science is one of the very few books which has transformed, not only our understanding of science, but that of the nature of the world it studies. Since its original publication in 1975, this book has inspired the multi-disciplinary and international movement of thought known as 'critical realism'; and its ideas have been influential across the whole spectrum of the sciences, arts and humanities and in a diverse array of social practices and professions. In this book, Roy Bhaskar sets out to revindicate ontology, critiquing the reduction of being in favor of knowledge, which he calls the "epistemic fallacy". Employing a transcendental argument from the nature of experimental activity, he establishes a critique of the dominant positivist and neo-Kantian traditions in the philosophy of science, developing a new ontology in which concepts of structure, difference and change come to the fore. Then, analyzing the nature of scientific discovery and development, he shows how, against both the empiricist and rationalist traditions, science can come to have a posteriori knowledge of natural necessity. The resultant position, which the author characterizes as transcendental realism, has the power to resolve many traditional philosophical problems, such as the problem of induction. At the same time it lays the basis for radically new accounts of social science, ethics and the project of human emancipation. Review 'A genuinely original argument in the philosophy of science is a rare thing indeed. Bhaskar has produced a new... strong, elaborate and well-integrated, elegant and powerful argument.' - Rom Harre, Mind 1977 'A remarkably interesting and stimulating book in an area of philosophy in which such books have become all too rare.' - S. Korner, Times Literary Supplement 1975 About the Author Roy Bhaskar is the originator of the philosophy of critical realism, and the author of many acclaimed and influential works including A Realist Theory of Science, The Possibility of Naturalism, Scientific Realism and Human Emancipation, Reclaiming Reality and Dialectic: The Pulse of Freedom. He is an editor of the recently published Critical Realism: Essential Readings and is currently chair of the Centre for Critical Realism.