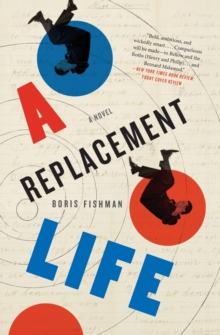 Product Description Winner of the VCU Cabell First Novelist Award Winner of the American Library Association's Sophie Brody Medal Finalist for the National Jewish Book Award A singularly talented writer makes his literary debut with this provocative, soulful, and sometimes hilarious story of a failed journalist asked to do the unthinkable: Forge Holocaust-restitution claims for old Russian Jews in Brooklyn, New York. Yevgeny Gelman, grandfather of Slava Gelman, â€œdidnâ€™t suffer in the exact wayâ€ he needs to have suffered to qualify for the restitution the German government has been paying out to Holocaust survivors. But suffer he hasâ€”as a Jew in the war; as a second-class citizen in the USSR; as an immigrant to America. So? Isnâ€™t his grandson a â€œwriterâ€? High-minded Slava wants to put all this immigrant scraping behind him. Only the American Dream is not panning out for himâ€”Century, the legendary magazine where he works as a researcher, wants nothing greater from him. Slava wants to be a correct, blameless Americanâ€”but he wants to be a lionized writer even more. Slavaâ€™s turn as the Forger of South Brooklyn teaches him that not every fact is the truth, and not every lie a falsehood. It takes more than law-abiding to become an American; it takes the same self-reinvention in which his people excel. Intoxicated and unmoored by his inventions, Slava risks exposure. Cornered, he commits an irrevocable act that finally grants him a sense of home in America, but not before collecting a price from his family. A Replacement LifeÂ is a dark, moving, and beautifully written novel about family, honor, and justice. Review â€œBold, ambitious and wickedly smartâ€¦A REPLACEMENT LIFE is full of descriptive treasuresâ€¦The only problem with this novel is that its covers are too close together. I wanted more of Slava, his bumpy love life, his venal grandfather.â€ (Patricia T. O'Conner, New York Times Book Review) â€œ[An] ingenious debut...the novel is often very funny, but its most rewarding moments come as Slava, listening to the war stories of...elderly strangers, finds himself drawing closer to the grandmother whose secrets once seemed lost to him.â€ ( The New Yorker) â€œFishman, like his protagonist, is a born storyteller with a tremendous gift for language on all brow levels, making for a captivating and rare first novel that is tender, learned, funny and deeply soulful - frequently all at the same time.â€ ( San Francisco Chronicle) â€œPowerful yet tenderâ€¦real and vibrantâ€¦Fishman never loses the readerâ€™s trust. No line in this book rings false, no character is unheard, no event seems like a plot device.â€ ( Newsweek) Sly and subversive...smart and sardonic...a touching story about a tenacious way of life disappearing amid the prosperity of America.â€ ( Wall Street Journal) â€œFishmanâ€™s firm yet light authorial hand, his gift for character and plot development, and his searing use of the English language belie his youth and his novice-novelist status. His witty dialogue and wry, believable descriptions leaven the dark, dense bread of the tale.â€ ( Chicago Tribune ) â€œIn the way the he presents these [truths] to us with feeling, humor and eyes wide open, novelist Fishman doesnâ€™t miss a beat.â€ (NPR/All Things Considered) â€œMordantly funny and movingâ€¦ Justice is eventually served in A REPLACEMENT LIFE along with plenty of black comedy, but the book is less about doing right or wrong than about where absolutes, moral or otherwise, do not apply â€¦ impressive.â€ (New York Times) â€œTova Reich and Shalom Auslander have delivered witty, nervy books on the subject. Add to their ranks Boris Fishmanâ€¦Fishman humanizes the participants so well. Contemporary novelists have a bad habit of making immigrants appear monolithically earthy and good-natured, but Fishman knows betterâ€¦deft and funny.â€ ( Minneapolis Star Tribune) â€œA memorable debut by a wonderfully gifted young writer...Boris Fishman has written a beautifully nuanced, tender, and often very funny novel about cons