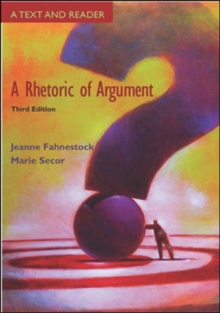 A RHETORIC OF ARGUMENT: TEXT AND READER

Product Description The stasis approach pioneered by Fahnestock and Secor distinguishes among four basic questions that arguments are written to answer: What is it? (Definition arguments) How did it get that way? (Causal arguments) Is it good or bad? (Evaluation arguments) What should we do about it? (Proposal arguments) These four questions, now standard in many argument texts, give students a constructive, engaging way to analyze arguments by other writers and to construct their own arguments. About the Author Jeanne Fahnestock is a Professor in the Department of English at the University of Maryland, College Park. She received her Ph.D. from the University of London in 1970. In addition to A Rhetoric of Argument, she has written Figures of Argument: Studies in the Rhetoric of Science (Oxford Univ. Press, 1996) and co-authored (with Marie Secor) Readings in Argument (Random House, 1985). She has also authored 25 articles, book chapters, and reviews appearing in such journals as Nineteenth-Century Fiction, College Composition and Communication, and Victorian Studies. Her teaching awards include the College of Arts and Humanities Teaching Award (student nominated) 1991 and the Outstanding Educator Award (1994). Marie Secor is an Associate Professor in the English Department at Penn State-University Park. She received her BA from the College of New Rochelle and her MA and Ph.D. from Brown University. In addition to A Rhetoric of Argument, Secor has co-authored Readings in Argument (Random House, 1985) with Jeanne Fahnestock, and The Return of the Good Soldier: Ford Madox Ford and Violet Hunt's 1917 Diary (University of Victoria, 1983) with Robert Secor. She is co-editor with Davida Charney, of Constructing Rhetorical Education (Southern Illinois University Press, 1992). She is also the author of many articles on rhetorical history and theory and the rhetoric of literary argument. Secor has won numerous awards for her teaching and research: the Liberal Arts Teaching Award, Graduate School Teaching Award (1996), Provost's Award for Collaborative Teaching, Golden Key Faculty Award, Pan-Hellenic Council award, Alumni Teaching Fellow Award, Penn State (1990), and the Schreyer Honors College Faculty Fellowship (1998).