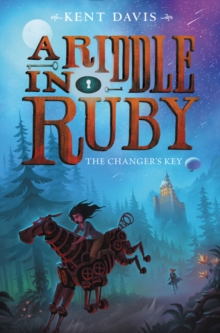 A RIDDLE IN RUBY #2: THE CHANGER'S KEY

The Riddle in Ruby trilogy takes readers on a rip-roaring adventure through an alternate version of colonial America, where magic and science meet, and where one young thief carries a secret everyone wants. In this second volume, Ruby Teach has become the enemyâ€™s prisoner. She bargained with her freedom to protect her friendsâ€”but her friends arenâ€™t about to abandon her, either. Thatâ€™s not what friends do.

Rubyâ€™s blood holds a secret, one that could turn the tides of the looming war for whomever unlocks it first. Rubyâ€™s father, former pirate Captain Teach, and her friendsâ€”a motley crew made up of a young aristocrat, a servant, and an apprentice alchemistâ€”must race against time to locate the hidden fortress where sheâ€™s being held. But the one person who could help them is Rubyâ€™s mysterious and powerful mother, and no one has seen her since Rubyâ€™s birth.

Kent Davis sweeps our heroes through cities and the deepest wilderness with imagination, humor, and magic that fans of Jonathan Stroud and Terry Pratchett will devour.