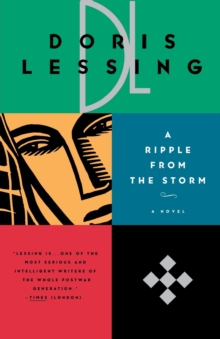 A RIPPLE FROM THE STORM (CHILDREN OF VIOLENCE)

Product Description Martha Quest, the embodied heroine of the Children of Violence series, has been acclaimed as one of the greatest fictional creations in the English language. In a Ripple from the Storm, Doris Lessing charts Martha Quest's personal and political adventures in race-torn British Africa, following Martha through World War II, a grotesque second marriage, and an excursion into Communism. This wise and starling novel perceptively reveals the paradoxes, passions, and ironies rooted in the life of twentieth-century Anglo-Africa. A Ripple from the Storm is the third novel in Doris Lessing's classic Children of Violence sequence of novels, each a masterpiece in its own right, and, taken together, an incisive and all-encompassing vision of our world in the twentieth century. Review "Absorbing reading...Lessing conveys [with great clarity] the emotions, aspirations and constant self-questing of Martha Quest, her most powerful character.""-- Sunday Times (London)""I read the Children of Violence novels and began to understand how a person could write about the problems of the world in a compelling and beautiful way, and it seemed to me that was the most important thing I could ever do."-- Barbara Kingsolver"There can't, I suppose, be anyone left who reads modern fiction at all and isn't aware of the importance of Doris Lessing's work...Lessing knows just what she is doing and a real, densely imagined, completely credible world emerges."-- John Wain, "Observer""Doris Lessing, of all the postwar English novelists, is the foremost creative descendant of that great tradition' which includes George Eliot and D. H. Lawrence."-- "New York Times Book Review""She is a mature ad valuable artist, adventurous in the mysteries of daily life, thoughtful, passionate, true."-- Stanley Kauffmann About the Author Winner of the 2007 Nobel Prize in Literature, Doris Lessing was one of the most celebrated and distinguished writers of our time, the recipient of a host of international awards. She wrote more than thirty booksâ€”among them the novels Martha Quest, The Golden Notebook, and The Fifth Child. She died in 2013.