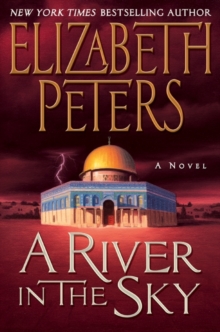 A RIVER IN THE SKY: A NOVEL (AMELIA PEABODY MYSTERIES)

Product Description â€œBetween Amelia Peabody and Indiana Jones, itâ€™s Ameliaâ€”in wit and daringâ€”by a landslide.â€â€”New York Times Book Review Intrepid archaeologist and superior sleuth Amelia Peabody returns in A River in the Sky. In this breathtaking new adventure, New York Times bestselling Grand Master Elizabeth Peters transports the indomitable Amelia and her family, the Emersons, from their usual milieu, early twentieth-century Egypt, to an excitingâ€”and dangerousâ€”new locale: Palestine! A tale full of atmosphere, intrigue, and thrills, A River in the Sky is further proof that â€œPeters has few rivalsâ€ (Houston Chronicle). From Publishers Weekly Set in 1910, the delightful 19th Amelia Peabody novel from bestseller Peters (after Tomb of the Golden Bird) takes Amelia and her husband, Emerson, to Palestine, where an English adventurer, George Morley, is planning to excavate Jerusalem's Temple Mount in search of the Ark of the Covenant. Gen. David Spencer, the director of Military Operations in London, suspects Morley, an amateur archeologist at best, of spying for the Germans, whose influence has been growing in the Middle East. Spencer wants Egyptologists Amelia and Emerson to stop Morley from undertaking a project sure to offend the three religious groups that consider the temple site holy. Meanwhile, son Ramses embarks on a treacherous journey to convey to his parents important information learned from two travelers he meets while on a dig in Samaria. Once again, MWA Grandmaster Peters uses vivid settings, sharp characterizations, and deft dialogue to transport the reader to another time and place. (Apr.) Copyright Â© Reed Business Information, a division of Reed Elsevier Inc. All rights reserved. Review â€œOnce again, MWA Grandmaster Peters uses vivid settings, sharp characterizations, and deft dialogue to transport the reader to another time and place.â€ (Publishers Weekly) From the Back Cover New York Times bestselling author Elizabeth Peters brings back beloved Egyptologist and amateur sleuth Amelia Peabody in an exciting tale set amid the ancient temples and simmering religious tensions of Palestine on the eve of World War I. . . . August 1910. Banned from the Valley of the Kings by the Antiquities Service, Amelia Peabody and her husband, Emerson, are relaxing at home in Kent, enjoying the tranquil beauty of summer. But adventure soon beckons when they are persuaded to follow would-be archaeologist Major George Morley on an expedition to Palestine, a province of the crumbling, corrupt Ottoman Empire and the Holy Land of three religions. Searching for the vanished treasures of the Temple in Jerusalem, Morley is determined to unearth the legendary Ark of the Covenant. The skeptical Emerson wants no part of the scheme until a request from the War Office and Buckingham Palace persuades him to reconsider. The Germans are increasing their influence in Palestine and British intelligence insists that Morley is an agent of the Kaiser, sent to stir up trouble in this politically volatile land. Emerson can't believe that the seemingly inept Morley is a German spy, but could he be mistaken? Determined to prevent a catastrophically unprofessional excavation that could destroy priceless historical finds as well as cause an armed protest by infuriated Christians, Jews, and Muslims who view the Temple Mount, also known as the Dome of the Rock, as sacred, Amelia, Emerson, and company head to Palestine. Though it is not to her beloved Egypt, the trip to Jerusalem will also reunite her with her handsome and headstrong son, Ramses, working on a dig at Samaria, north of the holy city. Before Ramses can meet his parents, however, he is distracted by an unusual party of travelers who have arrived in Samaria, including a German woman archaeologist and a mysterious man of unknown nationality and past. Unfortunately, Ramses's insatiable curiosity and his knack for trouble lead him to a startling discovery: information he must pass on to h