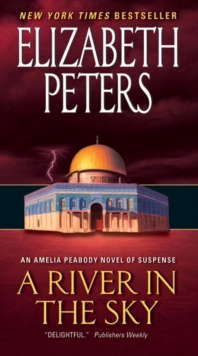 Product Description â€œBetween Amelia Peabody and Indiana Jones, itâ€™s Ameliaâ€”in wit and daringâ€”by a landslide.â€â€”New York Times Book Review Intrepid archaeologist and superior sleuth Amelia Peabody returns in A River in the Sky. In this breathtaking new adventure, New York Times bestselling Grand Master Elizabeth Peters transports the indomitable Amelia and her family, the Emersons, from their usual milieu, early twentieth-century Egypt, to an excitingâ€”and dangerousâ€”new locale: Palestine! A tale full of atmosphere, intrigue, and thrills, A River in the Sky is further proof that â€œPeters has few rivalsâ€ (Houston Chronicle). Review â€œOnce again, MWA Grandmaster Peters uses vivid settings, sharp characterizations, and deft dialogue to transport the reader to another time and place.â€ ( Publishers Weekly) From the Back Cover August 1910. Banned from the Valley of the Kings, Amelia Peabody and husband Emerson are persuaded to follow would-be archaeologist Major George Morley on an expedition to Palestine. Somewhere in this province of the corrupt, crumbling Ottoman Empireâ€”the Holy Land of three religionsâ€”Morley is determined to unearth the legendary Ark of the Covenant. At the request of British Intelligence, Emerson will be keeping an eye on the seemingly inept Morley, believed to be an agent of the Kaiser sent to stir up trouble in this politically volatile land. Amelia hopes to prevent a catastrophically unprofessional excavation from destroying priceless historical finds and sparking an armed protest by infuriated Christians, Jews, and Muslims. Meanwhile, Amelia's headstrong son, Ramses, working on a dig at Samaria, encounters an unusual party of travelers and makes a startling discoveryâ€”information that he must pass along to his parents in Jerusalem . . . if he can get there alive. About the Author Elizabeth Peters earned her Ph.D. in Egyptology from the University of Chicagoâ€™s famed Oriental Institute. During her fifty-year career, she wrote more than seventy novels and three nonfiction books on Egypt. She received numerous writing awards and, in 2012, was given the first Amelia Peabody Award, created in her honor. She died in 2013, leaving a partially completed manuscript of The Painted Queen.