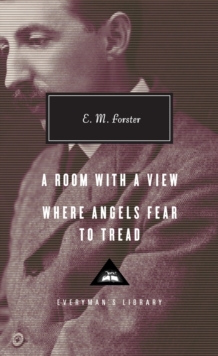 A ROOM WITH A VIEW, WHERE ANGELS FEAR TO TREAD (EVERYMAN'S LIBRARY CONTEMPORARY CLASSICS SERIES)

Product Description E. M. Forsterâ€™s beloved Italian novels, now in a single hardcover volume. Forsterâ€™s most memorably romantic exploration of the liberating effects of Italy on the English, A Room with a View follows the carefully chaperoned Lucy Honeychurch to Florence. There she meets the unconventional George Emerson and finds herself inspired by his refreshingly free spiritâ€” which puts her in mind of â€œa room with a viewâ€â€”to escape the claustrophobic snobbery of her guardians back in England. The wicked tragicomedy Where Angels Fear to Tread chronicles a young English widowâ€™s trip to Italy and its messy aftermath. When Lilia Herriton impulsively marries a penniless Italian and then dies in childbirth, her first husbandâ€™s family sets out to rescue the child from his â€œuncivilizedâ€ surroundings. But in ways that they canâ€™t possibly imagine, their narrow preconceptions will be upended by the rich and varied charms of Forsterâ€™s cherished Italy. About the Author E. M. Forster (1879-1970) was an English novelist, essayist, and short-story writer, and the author of A Passage to India and Howards End.Ann Pasternak Slater is a writer and former Fellow and Tutor at St. Anneâ€™s College, Oxford. Excerpt. Â© Reprinted by permission. All rights reserved. I N T R O D U C T I O N By Ann Pasternak Slater Cover-ups and the Unspoken It is 1901. E. M. Forster, a young man of twenty-two, has just arrived in Florence, and is deeply shocked. â€˜How flagrantly indecent,â€™ he writes to a friend, â€˜are the statues in the Uffizi with their little brown paper bathing drawers.â€™ Even Catholic fig-leaves are preferable. Rubens is unacceptable â€˜because he paints undressed people instead of naked onesâ€™. Forster, wayward maiden aunt of the Modernists, is affronted by the cover-ups of conventional propriety. The excessive decorum dominating the turn of the last century is barely conceivable today. Itâ€™s hard to imagine Michelangeloâ€™s David politely wrapped in paper pants. In A Room with a View Forster signals his amused dissent, when Lucy escapes from the Pension Bertolini â€˜to do something of which her well-wishers disapprovedâ€™, and buys an armful of art reproductions. An innocent rebellion? No. They are all nudes: Georgioneâ€™s â€˜Tempestaâ€™, the â€˜Idolinoâ€™, Botticelliâ€™s â€˜Birth of Venusâ€™. At which point Forsterâ€™s narrative blandly slips into the voice of his times: Venus, being a pity, spoiled the picture, otherwise so charming, and Miss Bartlett had persuaded her to do without it. (A pity in art of course signified the nude.) That shift in voice is one tiny example of Forsterâ€™s delicate ironies. Often his delivery is so successfully deadpan, itâ€™s hard to tell where he stands. The difficulty is compounded by his own inarticulable uncertainties. Where Angels Fear to Tread and A Room with a View fall neatly within the Edwardian era (1901â€“10). This was the period when audiences rioted nightly against the word â€˜shiftâ€™ in The Playboy of the Western World; when gentlemenâ€™s trousers were euphemized as â€˜ineffablesâ€™ or â€˜unmentionablesâ€™; when one of Forsterâ€™s Cambridge friends congratulated him on flouting linguistic decorum by calling Ginoâ€™s newborn son a â€˜babyâ€™ rather than a â€˜childâ€™. It is the time when Forsterâ€™s fictional alter ego, Maurice, seeks the help of a doctor, shamefacedly introducing himself as â€˜an unspeakable of the Oscar Wilde sortâ€™. Forster was sixteen years old when Wilde was condemned to two yearsâ€™ hard labour on a charge of gross indecency. Wilde died in 1900, just before the Edwardian decade began, and Forster was coming to a slow understanding of his own homosexuality. Unspeakable, unmentionable, ineffable: social taboos impose and are created by linguistic blackout; they are mutually reinforcing. The unspoken doesnâ€™t cease to exist. But it becomes unrecognizable, unknown, dimly sensed, feared, reviled. In Forsterâ€™s case, initial innocence was compounded by his unusually protected and protracted upbringing by a myriad maiden aunts and a yo