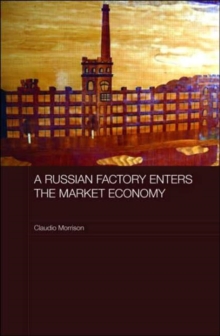 Product description This book charts the experiences of a textile enterprise in Russia during the 1990s, analysing post-Soviet management and managerial practices in order to illuminate the content, nature and direction of industrial restructuring in the Russian privatised sector during the years of economic transition. Based on extensive factory-level fieldwork, it focuses upon changes in ownership, management and labour organisation, unveiling the complex texture of social, communal and gender relations in the workplace over an extended period of time, including through crisis and bankruptcy, acquisition by new capitalist owners and attempted restructuring. It argues, contrary to dominant Western managerial theories which blame the failure of transition on the irrationality of Russian managerial strategies, that the rationale for the continued reliance on Soviet era managerial practices lay in the peculiar form of social relations in the workplace which were characteristic of the Soviet system. It engages with key issues, often neglected in the literature, such as social domination, power and conflict, that capture the problematic and open-ended character of social and economic transformation in post-Soviet production. It demonstrates that far from a simple transition to a market economy, the post-Soviet transition has reproduced most of the features of the old Soviet system, including its patterns of labour relations. About the Author Dr Claudio Morrison is senior research fellow at Middlesex university business school. Previously he held a British academy postdoctoral fellowship in the sociology department at Warwick university where he completed his PhD. His research interests include, labour migration, employment relations and organisational change in transformation economies. He has published on these issues in journals such as Europe-Asia studies, post-communist economies, British journal of industrial relations and industrial relation: a journal of economy and society.