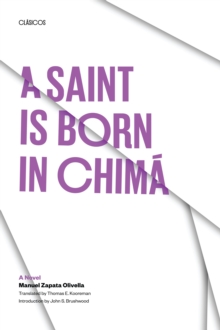 A SAINT IS BORN IN CHIMA (THE TEXAS PAN AMERICAN SERIES)

When the paralyzed cripple Domingo Vidal is rescued unsinged from a burning house, the people of Chima believe they have witnessed a miracle. Domingo becomes their patron "saint," and tales of his miracles multiply. Domingo makes the rains come, cures the blind and lame, and swells barren wombs with new life. But is Domingo really a saint, or is he a pagan idol? Padre Berrocal calls the people heretics, but they are afraid not to worship Domingo. To what excesses will superstition and ignorance drive the frightened people of Chima?

This novel, published in 1963 as En ChimÃ¡ nace un santo, makes important connections between the frustrations of poverty and the excesses of religious fanaticism. Zapata Olivella indicts the dogmatic attitudes of religious and civil institutions as a major cause of the creation of local cults like the one that grows up around "Saint" Domingo. In Zapata Olivella's compelling narrative, the struggle over Domingo points up both the inflexibility of established institutions and the potential power for change that lies within the hands of a determined populace.