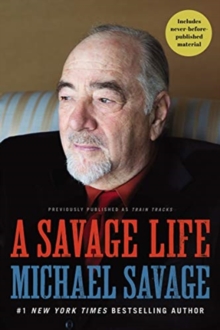 Product Description Radio legend Michael Savage reveals the man behind the microphone, sharing his extraordinary American journey and the adventures that shaped him. **FEATURING EXCLUSIVE, NEVER-BEFORE-PUBLISHED NEW MATERIAL** For twenty-five years, Michael Savage has captivated listeners on his national radio showÂ The Savage Nation, which reaches a loyal audience of more than ten million each week. InÂ A Savage Life, the usually private man tells his own compelling story in forty-six vignettes that span his childhood to today. These tales of Savageâ€™s journey from poor immigrantâ€™s son in New York City to media star are deeply personal and revealing: he writes of being so poor as a child that he had to wear a dead manâ€™s pants; of the various trials that beset his parents and â€œsilent brother,â€ Jerome, who was sent to an institution; of his botanical expeditions to Fiji in the 1970â€™s; and, most of all, of his family, his sustaining force throughout. â€œA marvelous storyteller.â€ â€”Â THE NEW YORKER â€œVivid storytelling.â€Â Â Â Â â€”Â WASHINGTON TIMES Â  Review â€œVivid storytelling. ... Michael Savage is one of the most influential conservative voices in America.â€ (Brett M. DECKER, Washington Times) â€œSavage recalls his childhood growing up in the Bronx. ... Heâ€™s got the knack for evocative detail, and this series of short vignettes features some indelible images, such as the immigrant father who, insisting that nothing be wasted, forced his son to wear dead menâ€™s trousers.â€ ( Washington Post) â€œA marvelous storyteller.â€ ( The New Yorker) About the Author Michael Savage was inducted into the National Radio Hall of Fame in 2016. The Savage Nation is one of the top radio programs and podcasts in America, broadcast on over 200 stations to millions of listeners. A prolific New York Times bestselling author, Dr. Savage has been profiled in Playboy and The New Yorker, and he has been awarded the Freedom of Speech Award from Talkers magazine. He received his PhD in epidemiology and nutrition sciences from the University of California at Berkeley.