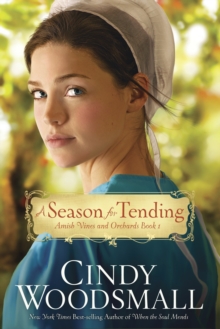 A SEASON FOR TENDING: BOOK ONE IN THE AMISH VINES AND ORCHARDS SERIES

Product Description In a community where conformity flourishes, seeds of Rhodaâ€™s odd behavior were planted long ago. Can she cultivate her relationships with the same care and tenderness that she gives her beloved garden? Â  Old Order Amish Rhoda Bylerâ€™s unusual gift and her remarkable abilities to grow herbs and berries have caused many to think her odd. As rumors mount that Rhodaâ€™s â€œgiftâ€ is a detriment to the community, she chooses isolation, spending her time in her fruit garden and on her thriving canning business.Â  Â  Miles away in Harvest Mills, Samuel King struggles to keep his familyâ€™s apple orchard profitable. As the eldest son, Samuel farms with his brothers, the irrepressible Jacob and brash Eli, while his longtime girlfriend Catherine remains hopeful that Samuel will marry her when he feels financially stable.Â  Â  Meanwhile, Samuelâ€™s younger sister Leah is testing all the boundaries during her rumschpringe, and finds herself far from home in Rhodaâ€™s garden after a night of partying gone badly. But Leahâ€™s poor choices serve as a bridge between Rhoda and the King family when a tragic mistake in the orchard leaves Samuel searching for solutions. Rhodaâ€™s expertise in canning could be the answer, but she struggles with guilt over the tragic death of her sister and doesnâ€™t trust herself outside her garden walls. As the lines between business, love, and family begin to blur, can Rhoda finally open up to a new life? And what effect will this odd, amazing woman have on the entire King family? Review ECPA bestseller About the Author Cindy Woodsmall is a New York Times and CBA best-selling author of nine works of fiction and one work of nonfiction, whose connection with the Amish community has been featured widely in national media and throughout Christian news outlets. She lives outside of Atlanta with her family. Excerpt. Â© Reprinted by permission. All rights reserved. Itâ€™s timeâ€¦ Emmaâ€™s voice rose from the past, encircling Rhoda and bringing a wave of guilt. Unyielding, unforgiving guilt. Rhoda plucked several large strawberries from the vine and dropped them into the bushelbasket. â€œTime for what?â€ she whispered. The moment the words left her mouth, she glanced up, checking her surroundings. She quickly looked beyond the picket fence that enclosed her fruit and herb garden but saw no one. Her shoulders relaxed. When townsfolk or neighbors noticed Rhoda talking to herself, fresh rumors stirred. Even family members frowned upon it and asked her to stop. Itâ€™s timeâ€¦ Emmaâ€™s gentle voice echoed around her for a second time. â€œTime for what?â€ Rhoda repeated, more a prayer to God than a question to her departed sister. God was the One who spoke in whispers to the soul, not the dead. But whenever Rhoda heard a murmuring in her mind, it was Emmaâ€™s voice. It had been that way since the day Emma died. The sound of two people talking near the road caught Rhodaâ€™s attention. Surely they were real. She rose out of her crouch, pressing her bare feet into the rich soil, and went in the direction of the voices, passing the long rows of strawberries, blueberries, and blackberries and her trellises of raspberries and Concord grapes. Heady scents rode on the spring air, not just from the ripening fruits, but from her bountiful herb garden that yielded rosemary, sage, scarlet bergamot, and dozens of other plants sheâ€™d spent years cultivating. Dusting her palms together, she skirted the raised boxes that held the herbs and peered through a honeysuckle bush. She was relieved to see actual people speaking to each other. Then she recognized them, and her fingertips tingled as her pulse raced. Her motherâ€™s eldest sister walked beside Rueben Glick, a man who wanted to make her life miserable. â€œSurely her Daed will listen to me this time.â€ Aunt Naomi clutched her fists tightly. â€œHe indulges her. Thatâ€™s the real problem.â€ Rhoda had no doubt they were talking about her. Since Emmaâ€™s death two years ago, the church leaders had avoided r