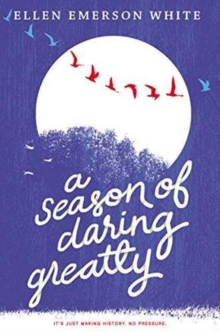 A SEASON OF DARING GREATLY

Product Description Eighteen-year-old Jill Cafferty just made history. Her high schoolâ€™s star pitcher, she is now the first woman drafted by a major league baseball team. Only days after her high school graduation, sheâ€™ll join the Pittsburgh Piratesâ€™ Class A Short Season team . . . but not everyone is happy to have her there. On top of the pressure heaped on every pitcher, Jill must deal with defying conventions and living up to impossible expectations, all while living away from home for the first time. Sheâ€™ll go head-to-head against those who are determined to keep baseball an all-male sport. Despite the reassurance of coaches and managers alike, a few of her teammates are giving her trouble. The media presence following her at each game is inescapable. And to top it all off, Jill is struggling with the responsibilities of being a national hero and a role model for young women everywhere. How can she be a role model when sheâ€™s not even sure she made the right choice for herself? Didnâ€™t baseball used to be fun? This literary and engrossing story of a young woman trying to mark out a place for herself in a male-dominated world will captivate fans of Friday Night Lights, The Art of Fielding, John Corey Whaley, and Laurie Halse Anderson. From School Library Journal Gr 8 Upâ€”Jill Cafferty, 17, is about to make history for becoming the first woman to be drafted into Major League Baseball, playing for the Pittsburgh Pirates with a $2 million contract. But rather than give interviews, she's more interested in pitching a shutout game. While the media and fans swarm, Jill navigates the tricky waters of displaying her expertise in a male-dominated sport, being away from home for the first time, and starting her professional career before she even goes to college. The friends she makes along the way give Jill's story more dimensions, expanding the narrative about her workout routines and sports activity. White writes confidently and with great detail about the mechanics of the game. The descriptions of life as a traveling baseball player are eye-opening and shine a realistic light on the so-called glamor of professional sports. Jill is a strong, centered, and witty character, and it's refreshing to read her smart comebacks to blatant sexism and her even-tempered reactions whenever disgruntled teammates or fans unfairly provoke her. VERDICT While this novel sometimes feels more like a script for a TV show, without a fully realized plot, it is still a good candidate for collections needing more positive depictions of characters who advocate against gender bias.â€”Michael Marie Jacobs, Darlington School, GA Review â€œJill Cafferty...walks a fine line between fitting in and asserting her own personality. ...the third-person narration allows readers to hear her silent inner voice, often ironic or humorous...Go girl.â€ ( Kirkus Reviews) â€œThe pleasure of reading this novel comes from the steady, realistic portrayal of Jillâ€™s experience as a rookie and as a young woman breaking into a manâ€™s sports. An ensemble of well-drawn, interesting characters revolves around Jill...Readers will hope for sequels tot this unusual and engaging novel.â€ ( Booklist) â€œJill navigates the tricky waters of displaying her expertise in a male-dominated sport. â€¦Jill is a strong, centered, and witty character, and itâ€™s refreshing to read her smart comebacks to blatant sexism. â€¦a good candidate for collections needing more positive depictions of characters who advocate against gender bias.â€ (School Library Journal) â€œWhite imbues Jill with a fully credible mix of steely resolve, stealthy sense of humor, carefully repressed rage against her naysayersâ€¦players in the pipeline wonder when women will get their chance; now these readers can ponder whether the first pro experience will be a lot like this.â€ (Bulletin of the Center for Childrenâ€™s Books (starred review)) â€œJillâ€™s desire to do her job without being stereotyped or bullied will resonate with readers in this u