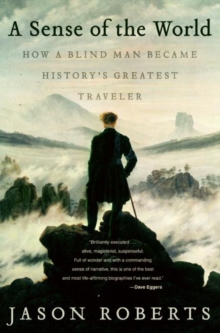 A SENSE OF THE WORLD: HOW A BLIND MAN BECAME HISTORY'S GREATEST TRAVELER

Product Description He was known simply as the Blind Traveler -- a solitary, sightless adventurer who, astonishingly, fought the slave trade in Africa, survived a frozen captivity in Siberia, hunted rogue elephants in Ceylon, and helped chart the Australian outback. James Holman (1786-1857) became "one of the greatest wonders of the world he so sagaciously explored," triumphing not only over blindness but crippling pain, poverty, and the interference of well-meaning authorities (his greatest feat, a circumnavigation of the globe, had to be launched in secret). Once a celebrity, a bestselling author, and an inspiration to Charles Darwin and Sir Richard Francis Burton, the charismatic, witty Holman outlived his fame, dying in an obscurity that has endured -- until now. A Sense of the World is a spellbinding and moving rediscovery of one of history's most epic lives. Drawing on meticulous research, Jason Roberts ushers us into the Blind Traveler's uniquely vivid sensory realm, then sweeps us away on an extraordinary journey across the known world during the Age of Exploration. Rich with suspense, humor, international intrigue, and unforgettable characters, this is a story to awaken our own senses of awe and wonder. From Publishers Weekly Starred Review. In this vibrant biography of James Holman (1786â€“1857), Roberts, a contributor to the Village Voice and McSweeney's, narrates the life of a 19th-century British naval officer who was mysteriously blinded at 25, but nevertheless became the greatest traveler of his time. Holman entered the navy at age 12, at the height of the Napoleonic Wars. When blindness overcame him, Holman was an accomplished sailor, and he engineered to join the Naval Knights of Windsor, a quirky group who only had to live in quarters near Windsor Castle and attend mass for their stipend. For many blind people at the time, this would have been the start of a long (if safe) march to the grave. Holman would have none of it and spent the bulk of his life arranging leaves of absence from the Knights in order to wander the world (without assistance) from Paris to Canton; study medicine at the University of Edinburgh; hunt slavers off the coast of Africa; get arrested by one of the czar's elite bodyguards in Siberia; and publish several bestselling travel memoirs. Roberts does Holman justice, evoking with grace and wit the tale of this man once lionized as "The Blind Traveler." (June) Copyright Â© Reed Business Information, a division of Reed Elsevier Inc. All rights reserved. From School Library Journal Adult/High Schoolâ€“An engaging account of a most undeservedly obscure figure. The book itself is a fortuitous happenstance; had a certain volume not caught Robertss eye during a wander break through the stacks on a library visit, the story of Lieutenant James Holman, known to his contemporaries as the Blind Traveler, might still be lost to a modern audience. Born in 1786, Holman began service in the British navy at the age of 12. The rigorous lifestyle ravaged him physically; by age 20, pain had left him nearly incapacitated; five years later, he was blind, ill, and strapped for funds. Holman pursued a courseâ€“travelâ€“that proved the best remedy. The Blind Traveler traversed the globe, encountering a plethora of colorful characters and gaining short-lived fame, if not fortune, from his narratives and memoirs. Roberts re-creates each journey, both geographical and physiological, providing insights into 18th-century beliefs, mores, and worldly knowledge, along with a ghastly array of cures inflicted on Holman by practitioners of medicine. The admiration and respect that the author feels for his subject are unmistakable, but in no way diminish the accomplishments of the most restless man in history. Black-and-white reproductions show Holman as he was depicted by contemporaries during his travels. This volume is an obvious addition to any number of booklists, from biographies to nonfiction that reads like fiction.