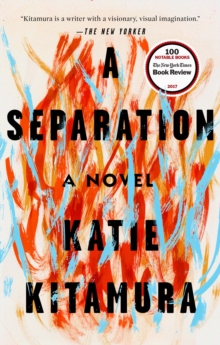 A SEPARATION: A NOVEL

Product Description A PBS NewsHour/New York TimesÂ Book Club PickA NEW YORK TIMES NOTABLE BOOKNamed a best book of the year by theÂ New York Times, NPR,Â Huffington Post,Â The A.V. Club, The San Francisco Chronicle, The Guardian, Refinery29, Town & Country, Harper's Bazaar, NYLON, BookRiot.â€œKitamuraâ€™s prose gallops, combining Elena Ferrante-style intricacies with the tensions of a top-notch whodunit.â€Â â€”ElleThis is her story. About the end of her marriage. About what happened when Christopher went missing and she went to find him. These are her secrets, this is what happened... Â  A young woman has agreed with her faithless husband: it's time for them to separate. For the moment it's a private matter, a secret between the two of them. As she begins her new life, she gets word that Christopher has gone missing in a remote region in the rugged south of Greece; she reluctantly agrees to go look for him, still keeping their split to herself. In her heart, she's not even sure if she wants to find him. As her search comes to a shocking breaking point, she discovers she understands less than she thought she did about her relationship and the man she used to love.Â  A searing, suspenseful story of intimacy and infidelity, A Separation lays bare what divides us from the inner lives of others. With exquisitely cool precision, Katie Kitamura propels us into the experience of a woman on edge, with a fiercely mesmerizing story to tell. Review â€œKitamura is a writer with a visionary, visual imaginationâ€¦ In A Separation, [she] has made consciousness her territory. The book is all mind, and an observant, taut, astringent mind it is.â€Â â€” TheÂ New Yorker â€œA slow burn of a novel that gathers its great force and intensity through careful observation and a refusal to accept old, shopworn narratives of love and loss.â€ â€” Jenny Offill, author ofÂ  Dept. of Speculation "Thrilling."Â â€” New York Magazine â€œFascinating, artful and atmospheric.â€Â â€”Paula McLain, Parade magazine â€œUnsettlingâ€¦ Kitamura traces the narratorâ€™s thoughts in sentences striking for their control and lucidity, their calm surface belied by the instability lurking beneathâ€¦ The more the narrator tells us, the less we trust her. And the less we trust her, the more this hypnotic novel compels us to confront the limits of what we, too, can know.â€Â â€” O, the Oprah Magazine â€œA novel so seamless, that follows its path with such consequence, that even minor deviations seem loaded with meaning. Wonderful.â€ â€” Karl Ove Knausgaard, author ofÂ  My Struggle â€œAccomplishedâ€¦ a coolly unsettling work.â€Â â€” New York Times Book Review â€œKitamuraâ€™s prose gallops, combining Elena Ferrante-style intricacies with the tensions of a top-notch whodunit.â€Â â€” Elle â€œKitamura weaves a novel of quiet power, mostly due to a narrative voice that is so subtly commandingâ€”so effortlessly self-aware and perceptive, teeming with dry yet empathetic humorâ€”that itâ€™s a challenge not to follow her journey in a single sitting.â€Â â€” Harper's Bazaar â€œKatie Kitamura breathes new life into the theme of marital breakdown.â€Â â€” The New Republic â€œ[A]nÂ atmospheric and emotionally sophisticated novel that reads like a taut Patricia Highsmith thriller.â€Â â€” BBC â€œThe burnt landscape, the disappearance of a man, the brilliantly cold, precise, and yet threatening, churning tone of the narratorâ€”makeÂ  A SeparationÂ an absolutely mesmerizing work of art.â€ â€” Rachel Kushner, author ofÂ  The Flamethrowers "Katie Kitamura is a visionary....Â  A SeparationÂ is a poised literary thriller on the outside and an investigation of interiority and the faulty narratives we assign to the world on the inside."Â â€” LitHub " A SeparationÂ looks poised to be the literaryÂ  Gone GirlÂ of 2017." â€” The MillionsÂ  " A Separation displays Kitamuraâ€™s stylistic control once again....Â Violence of all kinds, not just against other bodies but against other minds, remains Kitamuraâ€™s quarry. â€˜A Separationâ€™ proves that few stalk such game more patiently or more powerfully.â€Â â€” San Francisco