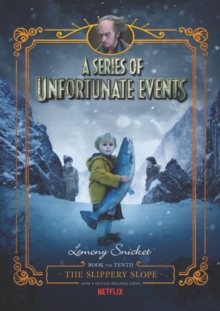 A SERIES OF UNFORTUNATE EVENTS #10: THE SLIPPERY SLOPE NETFLIX TIE-IN

Product Description NOW A NETFLIX ORIGINAL SERIES Like bad smells, uninvited weekend guests or very old eggs, there are some things that ought to be avoided. Snicket's saga about the charming, intelligent, and grossly unlucky Baudelaire orphans continues to alarm its distressed and suspicious fans the world over. The tenth book in this outrageous publishing effort features more than the usual dose of distressing details, such as snow gnats, an organised troupe of youngsters, an evil villain with a dastardly plan, a secret headquarters and some dangerous antics you should not try at home. With the weather turning colder, this is one chilling book you would be better off without. About the Author Lemony Snicket had an unusual education which may or may not explain his ability to evade capture. He is the author of the 13 volumes in A Series of Unfortunate Events, several picture books including The Dark, and the books collectively titled All The Wrong Questions. Brett Helquist's celebrated art has graced books from the charming Bedtime for Bear, which he also wrote, to the New York Timesâ€“bestselling A Series of Unfortunate Events by Lemony Snicket to the glorious picture book adaptation of Charles Dickens's A Christmas Carol. He lives with his family in Brooklyn, New York. Michael Kupperman has done many illustrations for such publications as Fortune, The New Yorker, and The New York Times. He frequently writes scripts for DC Comics. This is his first book.