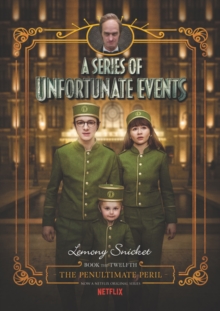 A SERIES OF UNFORTUNATE EVENTS #12: THE PENULTIMATE PERIL NETFLIX TIE-IN

Product Description NOW A NETFLIX ORIGINAL SERIES Lemony Snicket returns with the last book before the last book of his bestselling A Series of Unfortunate Events. Scream and run away before the secrets of the series are revealed! Very little is known about Lemony Snicket and A Series of Unfortunate Events. What we do know is contained in the following brief list: The books have inexplicably sold millions and millions of copies worldwide People in more than 40 countries are consumed by consuming Snicket The movie was as sad as the books, if not more so Like unrefrigerated butter and fungus, the popularity of these books keeps spreading Even less is known about book the twelfth in this alarming phenomenon. What we do know is contained in the following brief list: In this book, things only get worse Count Olaf is still evil The Baudelaire orphans do not win a contest The title begins with the word â€˜Theâ€™ Sometimes, ignorance is bliss. About the Author Lemony Snicket had an unusual education which may or may not explain his ability to evade capture. He is the author of the 13 volumes in A Series of Unfortunate Events, several picture books including The Dark, and the books collectively titled All The Wrong Questions. Brett Helquist's celebrated art has graced books from the charming Bedtime for Bear, which he also wrote, to the New York Timesâ€“bestselling A Series of Unfortunate Events by Lemony Snicket to the glorious picture book adaptation of Charles Dickens's A Christmas Carol. He lives with his family in Brooklyn, New York. Michael Kupperman has done many illustrations for such publications as Fortune, The New Yorker, and The New York Times. He frequently writes scripts for DC Comics. This is his first book.